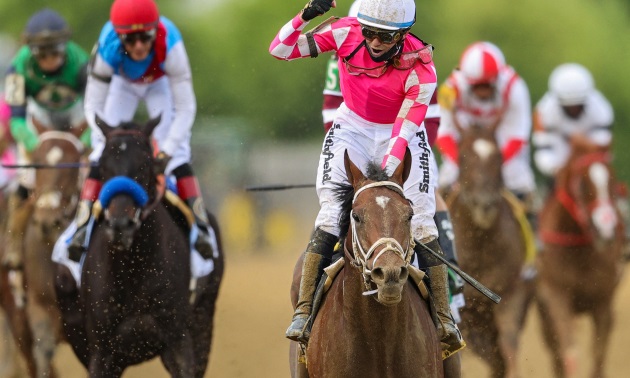 Rombauer struck from off the pace to post a surprise victory in the Preakness Stakes at Pimlico.

Flavien Prat made ground to challenge front-runners Medina Spirit and Midnight Bourbon in the straight, and Rombauer responded emphatically to provide trainer Mike McCarthy with Preakness success at his first attempt to win any American Triple Crown race.

French jockey Prat was also winning the race for the first time as the 14-1 shot prevailed by three and a half lengths from Midnight Bourbon, with Kentucky Derby hero Medina Spirit having to settle for third in his bid to follow up his controversial Churchill Downs victory at the start of the month.

Prat, who moved from his native France to America in 2015, previously won the 2019 Kentucky Derby when Country House was promoted from second following the disqualification of Maximum Security.

He told NBC Sports: “This does feel different (to my Kentucky Derby win) – what a feeling.

“I’m so thankful to Michael (McCarthy) and all his team.

“When I left France it was to do better than I was doing there.

“I didn’t know the magnitude of the Triple Crown races, but I’ve since realised there is so much history behind them.

“To win one was amazing – to win the Preakness is even better.”

An emotional McCarthy added: “I’m so proud of this horse and everybody involved.

“It means a lot to be here, participating on a day like this. Hats off to everyone – this is fantastic.”

As Rombauer began to mount his challenge, McCarthy’s belief grew that victory was in his grasp.

He added: “I reached over my shoulder and said to someone ‘he’s a little bit closer today, but it looks like he’s travelling well’.

“At the three-and-a-half-furlong pole, I saw some horses around him moving and not really going anywhere – and coming to the quarter pole, I started to get a little excited.

“Then at the eight pole, it was like an out-of-body experience.”

Bob Baffert’s Medina Spirit, sent off the 5-2 favourite, tried to make all – having been allowed to run in the second leg of the Triple Crown despite testing positive for 21 picograms of the anti-inflammatory drug betamethasone following his Kentucky Derby win.

He made a bold bid but was unable to repel first Midnight Bourbon and then the winning run of Rombauer.