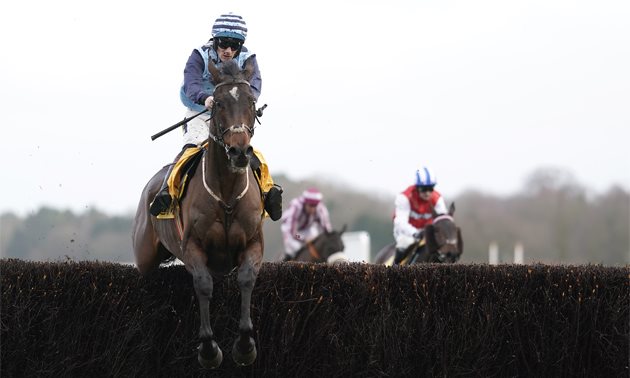 Since joining Nigel Twiston-Davies from Tom Taaffe, Riders Onthe Storm had won both his starts in Britain, but this Grade One heat represented a huge jump in class.

Cyrname was sent off the 4-11 favourite to get back on the winning trail after his King George defeat, but he looked in trouble down the back straight when the eventual winner loomed upsides.

Riders Onthe Storm soon assumed control as Cyrname started to toil, but 50-1 outsider Traffic Fluide then appeared to be finishing with real purpose.

However, Gary Moore's charge crashed out at the last - with a tired Cyrname also taking a heavy fall further back, as the winner coasted home by 14 lengths at 7-2 under Sam Twiston-Davies, from the only other finisher Janika.

Cyrname and Traffic Fluide are both up and ok after their falls. pic.twitter.com/QteVDiszx4

Traffic Fluide was quickly on his feet, but Cyrname was down for some time before eventually getting up - a moment which drew huge applause from the anxious Ascot crowd.

Nigel Twiston-Davies said: "I think he was probably a lucky winner in the end - but as Sam said, he went to take on Cyrname, and that probably tired the horse out a bit.

"He is quite a free-running horse, and you don't want to give Cyrname lots of rope. Maybe it was a mistake taking him on quite so soon - but hey, we won it.

"The owner found him and bought him - and well done to him, Carl Hinchy. I love having these nice horses and I wish I could say I found it - but I didn't.

"It was very much a jump in grade, but we were hopeful. You never think you are going to beat Cyrname, but he has had his problems since beating Altior.

"In this really soft ground it (trip) was probably pushing him today, because he was getting tired in that ground. Better spring ground at Cheltenham, with a bit of sun on his back, I hope he will be even better."