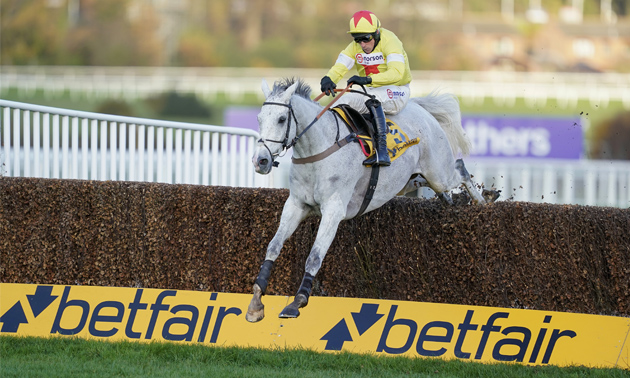 Paul Nicholls believes Politologue is at the top of his game ahead of Saturday’s Clarence House Chase at Ascot.

Last season’s Queen Mother Champion Chase hero picked up where he left off when landing a second victory in the Tingle Creek at Sandown in December, and will be a hot favourite to provide his trainer with a record sixth triumph in the Grade One feature.

POLITOLOGUE wins a second #BetfairTingleCreek, leading home a 1-2 for @PFNicholls who saddles his 11th winner of the race 👏pic.twitter.com/Q2D5nl8C3o

Harry Skelton was on board the John Hales-owned grey both at Cheltenham and Sandown, but with his brother Dan responsible for a Champion Chase contender this term in Nube Negra, Harry Cobden will be reunited with Politologue this weekend.

Nicholls told Sky Sports Racing: “Harry is here every day and rides Politologue a lot anyway. He schooled him on Monday and won a Tingle Creek on him (in 2017), so it’s no big issue.

“The horse is in good form and the ground is ideal, so we’re looking forward to it. I think he’s in as good a place as he’s been for a long time – I don’t think Harry has ridden him in the form that he’s in at the moment, apart from when he won the Tingle Creek.

“We changed things last season after he had that little bleed in the Tingle Creek and he’s not been beaten since. I’ve never known him look better and be so enthusiastic.

“He’ll go straight to Cheltenham after Saturday. It’s absolutely perfect timing for him.”

Politologue is set to be joined by stable companion Duc Des Genievres.

Winner of the 2019 Arkle when trained by Willie Mullins, the eight-year-old was runner-up to Put The Kettle On at Cheltenham in November, before placing third behind Nube Negra at Kempton over the Christmas period.

Nicholls added: “He’s won on soft ground, (but) I’m not convinced he wants it that testing.

“He ran out of petrol up the hill the first day at Cheltenham and the other day (at Kempton) we made a little bit more use of him and he finished tamely.

“He’s got it all to do. We’re going to take our chance as he’s not the easiest horse in the world to place.”

Of the latter, Nicholls said: “She’s a tough, genuine mare who ran very well at Cheltenham the last day.

“Strictly on ratings, she’s got it all to do, but she does get 6lb off Magic Of Light and also Roksana, who looks like she’ll be hard to beat.

“Our mare is in between the devil and the deep blue sea with her rating, but hopefully she’ll run well and get the trip.”

There will be one less rival for Politologue to face, however, with Kate Harrington, assistant trainer to her mother, Jessica, confirming that Impact Factor will not make the journey from Ireland.

Instead, the lightly-raced nine-year-old will stay closer to home for the Dublin Racing Festival.

“Impact Factor won’t go for the Clarence House and will instead run in the Ladbrokes Dublin Chase at Leopardstown (February 6),” said Harrington.