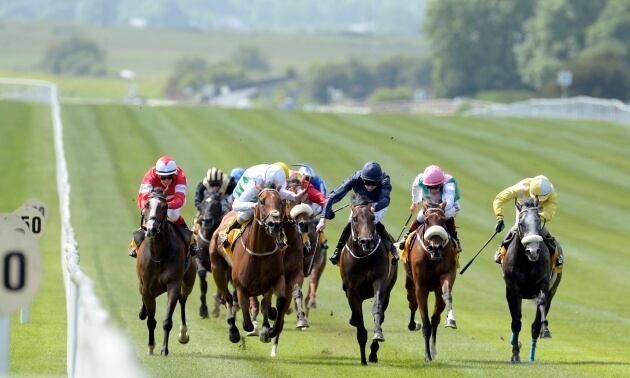 Jim Bolger will be hoping Poetic Flare can enjoy just a fraction of the success of his sire Dawn Approach, as he landed the opening race of the Irish Flat season at Naas.

Dawn Approach won the Irish Stallion Farms EBF Maiden in 2012 and went on to be crowned champion juvenile, as well as winning the 2000 Guineas and St James's Palace Stakes in his Classic season.

Poetic Flare, by Dawn Approach, gets off the mark at the first attempt, taking the curtain-raiser of the Irish Flat turf season for Jim Bolger and Kevin Manning at @NaasRacecourse! 🏇🇮🇪

Poetic Flare was sent off the 2-1 joint-favourite for the five-furlong contest, along with Aidan O'Brien's Lipizanner - a first runner for the yard from the sire Uncle Mo.

The two pulled clear entering the final furlong, but while Lipizanner looked green when Seamie Heffernan pulled the whip and drifted to his left, Poetic Flare appeared more streetwise.

It was not until the final few strides that Poetic Flare began to get on top for Kevin Manning, but he managed to pull half a length clear with Lipizanner running a very promising race himself.

"It was dead, tacky ground. He was very straightforward and did that well. I'm very pleased with him," said Manning.

"He knew his job. He'll be a bit better when he gets better ground and will appreciate stepping up in trip.

"Overall you'd be very happy with him. He was very professional and did that well."

Bolger won the race three years in succession between 2011 and 2013.

The money came for Woodford General before the Naas Nursery Of Champions Maiden and proved spot on as he ran out a ready winner.

Having shown ability of the final of three outings last season, Kieran Cotter's three-year-old was sent off the 7-2 second-favourite.

From his draw near the rail, Ben Coen ended up towards the centre of the track and when he asked the son of Gutaifan to quicken up he quickly shot seven lengths clear. Getawiggleon beat O'Brien's King Of Malta in a photo for second.

"We always thought this lad had a huge amount of potential, but in a winter maiden you just can't be sure," said Cotter.

"He's definitely stakes material and he's from a very good family. He loves this ground and he's incredibly tough.

"He did all that was asked of him today and we're looking forward to the future."