Palmer hopeful of bold bid from Acquitted in Victoria Cup 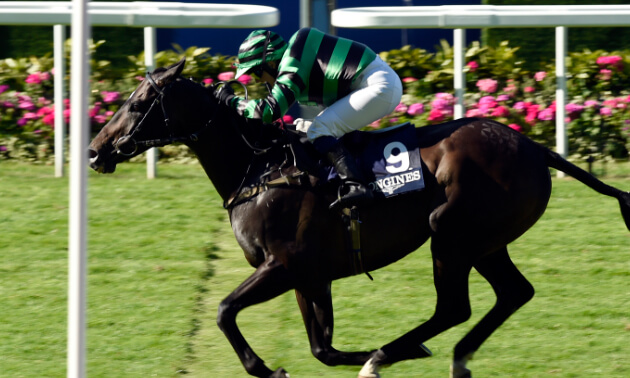 Hugo Palmer’s Acquitted will compete over seven furlongs for the first time when he lines up for the ultra-competitive tote+ Victoria Cup at Ascot on Saturday.

Acquitted was beaten just a neck when making his seasonal reappearance in Doncaster’s Spring Mile, his first run since being gelded last year.

Palmer, who hopes that a marginally shorter trip will suit the son of Night Of Thunder, has no concerns about the forecast softer surface for the four-year-old.

“We’re trying a new trip with him, coming back to seven furlongs,” he said.

“I always thought we’d end up going up to 10 furlongs, but he travelled very strongly through the Spring Mile at Doncaster and just got touched off at the finish.

“We know he handles cut in the ground, and a stiff seven furlongs at Ascot should suit him down to the ground – he’s not slow.”

Great battle! Artistic Rifles gets back past Acquitted to give PJ McDonald a quickfire double and win the @Unibet Spring Mile for Ed Bethell at @DoncasterRaces pic.twitter.com/g8aJ4hrDOZ

The Cable Bay gelding is owned by John Guest Racing, for whom Margarson trained Excellent Guest to win the same race at 25-1 in 2013.

“We won it first time out a few years ago with Excellent Guest, a horse with a similar profile,” said the Newmarket handler.

“In an ideal world we could have got him rated 90, but he wouldn’t have got in, so he’s probably on his top mark,” added Margarson.

“He’s shown form at 103, and then they dropped him to 98, which was fair enough for starting out in the handicap world.”

“He’s come out of his last win at Ascot very well,” said Spencer.

“We’re dropping back to seven furlongs, but I think the rain is going to bring out the stamina in him which should suit.

“Angus Villiers rides again, which is great. He’s a good young jockey who works for us, and I think you’re going to hear a lot more of him this year.

“It’s going to be a stamina test for everything in the race, with the ground being as slow as it will be on Saturday.”

Spencer also runs Tyson Fury on the card, in the Listed Buckhounds Stakes over a mile and a half.

The four-year-old’s seasonal reappearance resulted in a fourth-placed finish in the Group Three John Porter Stakes at Newbury, where he came home nine and a quarter lengths behind William Haggas’ highly-regarded Al Aasy.

“He’s come out of his Newbury race really well – he was quite fresh that day,” said Spencer.

“He was a bit gassy and a bit keen in the early parts of the race. But hopefully the freshness is out of him now, and I think he’s taken a step forward from his Newbury run, so we’re looking forward to running him.”

Simon and Ed Crisford’s Without A Fight finished second in the John Porter and also heads to the Buckhounds.

Ralph Beckett’s Albaflora returns after being beaten a head into second, and just in front of Without A Fight, over two furlongs further here in the Listed Noel Murless Stakes on her final three-year-old start last October.