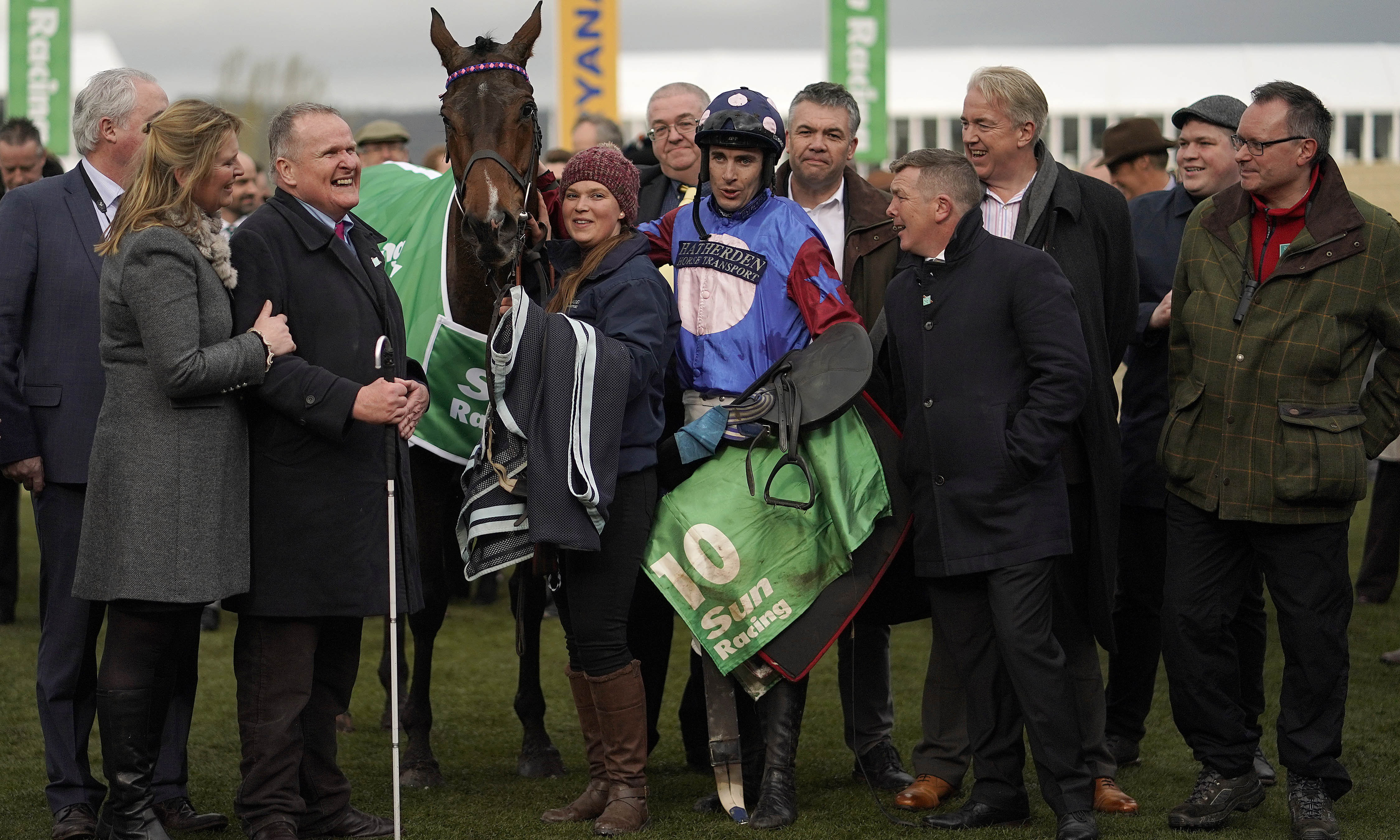 The former champion staying hurdler is on something of a redemption mission as since losing his crown in March 2020, he has won only one of five subsequent races.

Second in this race 12 months ago to Thyme Hill on what was his seasonal bow, this year he heads to Newbury having run at Wetherby first, when third behind Paul Webber’s mare Indefatigable, beaten just over five lengths.

“At the time we were a little bit deflated, wondering why he was making everything so hard for himself,” said Lavelle.

“On re-watching the race, it was probably a better performance than we thought at the time.

“My gut feeling is we probably need to be harder on him in training than we have been. He’s got older and wiser and I think he takes a bit more work.

“He’s done a lot since then, including going to Newbury for the gallops morning where he did a good bit of work. He should be stripping a bit fitter and sharper.”

Lavelle has decided to fit the nine-year-old with cheekpieces, with a career over fences still on hold for the time being.

“When we put a visor on him a few years ago he ran like the Hounds of the Baskervilles were chasing him in the Albert Bartlett. It was a disaster and clearly he raced with way too much vigour and didn’t last to the end,” said Lavelle.

“We are not putting them on because he is ungenuine or saving something for himself, therefore it’s not about having a visor to block out everything, it’s about doing something to make him concentrate a bit more and stop him worrying about galloping alongside other horses and to think more about travelling and what’s going on in the race.”

Indefatigable meets Paisley Park on 6lb worse terms this time, but Webber is keen to let her have another crack at the boys.

“We were very pleased with her at Wetherby. She didn’t go up in the handicap and the handicapper didn’t necessarily rate the race too highly, but we don’t mind that,” he said.

“It does look a strong race and we are 6lb worse off than we were, so she is obviously going to have to improve again, but she deserves her shot.”

Another mare in the field is Paul Nolan’s Cheltenham Festival winner Mrs Milner, who landed the Pertemps Final back in March.

Since then she has won a Listed mares’ hurdle at Limerick.

“There’s times when you’ve just got to give it a go,” said Nolan.

“There’ll be no excuses jumping-wise or anything like that. Let’s see what level she can get to.”

Olly Murphy admits to being disappointed with Thomas Darby when he was fourth behind Indefatigable at Wetherby but he expects a better display now his horses are in much ruder health.

“He’s in good form. To be honest I was a little disappointed with his first run of the season at Wetherby. Sean Bowen didn’t think he handled the tacky ground that day,” said Murphy.

“I’ve fitted him with a tongue tie and hopefully that might help him finish his race off a bit better.

“If I hadn’t taken him to Wetherby I’d fancy him pretty strongly off his Aintree run (third to Thyme Hill) but this is a bit of a fact finding mission, he’s got to go and do it now.

“A flat track, three miles, decent ground – he ticks plenty of boxes but he’s got to go and do it now.

“On a going day he’ll go very close. He’s better off with the mare who won at Wetherby, my horses are flying now, so fingers crossed.”

Rebecca Curtis’ Lisnagar Oscar, a 50-1 winner of the Stayers’ Hurdle in 2020, and Nicky Henderson’s On The Blind Side complete the field.

Curtis is hoping Lisnagar Oscar can now return to his best following a pleasing comeback at Aintree.

“I was really pleased at Aintree because he always needs his first run and it was over two and a half miles,” said Curtis.

“I liked the way he stayed on and he seems in great form. Obviously this year he doesn’t have a Grade One penalty which will help. He should have a great chance I hope.

“He was a bit outpaced at Aintree, just like I thought he might be. I’m surprised he’s as big a price as he is to be honest.

“Going off the year before last, he has the best form in the race but nothing much went right last year. He got struck into in this race last year and it all went wrong but he’s fresh and well now.”