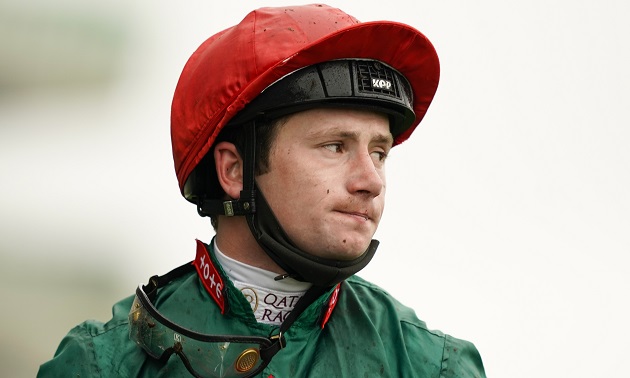 Champion jockey Oisin Murphy has revealed how close he was to quitting race-riding following his ban for a failed drugs test.

Speaking on Sporting Life’s My Sporting Mind the 25-year-old admitted he feared his looming ban would both end his fight for a consecutive championship title and his career all together.

"I felt like the world had turned against me, over something I didn't really mean to happen," Murphy told My Sporting Mind presenter Charlie Webster.

"I probably spent a couple of weeks thinking about what I should do and when I say 'I wouldn't get back on a horse', I'd obviously go riding on the roads and watch show jumping and ride as a hobby, but whether I wanted to race-ride again is something I wasn't entirely comfortable with.

"That's something I haven't really touched on before, certainly not publicly.

"When I went to America [for the Breeders' Cup] I was hoping I'd done enough to win the Jockeys' Championship and by the time I rode in my last race, I wasn't quite sure if I wanted to ride again.

"Or I wasn't sure where or when I wanted to race-ride again."

Murphy will be back on March 11 after his six-month suspension was reduced to three following a semi-successful appeal as he was absolved from taking cocaine himself, but admits he struggled mentally heading into the autumn as performances declined while he awaited news of his fate.

"I didn't ride very well in August and as a result of that my confidence and my whole outlook took a dip as well.

"But, I stopped feeling sorry for myself and got through August and I won a Group 1 in September, my strike-rate improved to above 20%."

Murphy added: "I had the drug case weighing on my mind, every time I tried to forget it I'd get a letter in the post about it and it would be on my mind constantly again. I knew I had good people behind me that really helped, but my future was still very much up in the air, which was very hard.

"I remember clearly around October 21 I was riding on a very cold evening at Kempton and I remember feeling the season was going to be defined one of two ways - I could fight on or let my season, my year, crumble to nothing.

"I knew I was going to get the ban, but I also knew that if I didn't win the Jockeys' Championship it would have been a season when I allowed everything that was going on around me to defeat me.

"But if I could get it over the line I'd have proved that where most people would have crumbled, or thrown in the towel, I'd have picked myself up off the floor. And no one can do that for you, you've got to do that for yourself.

"So in late-October, William [Buick] got within four winners of me and I went to Newcastle under real pressure. I rode four winners and the following day at Chelmsford I had six rides and won four of them as well.

"After such a hard time it was at that point I was able to give myself a little bit of a pat on the back having been written-off by a lot of people. That was an important moment for myself, my inner belief and well-being."

Things are looking up for Britain's champion jockey as he nears the end of his ban. And, as he goes for a third successive title in 2021, he has plenty to draw on following a turbulent 2020.

“If I do come back, and I do very much hope I will, I'm hungry as I ever have been now.

"I feel great at the moment, as we speak I'm in top spirits, but I need to achieve again, I can't just roll back into the jockeys' room and go around riding five horses a day and maybe winning only one.

"If I make it my intention to come back and to do well then I really have to go to another level."

My Sporting Mind podcast is available through your normal podcast provider, including: