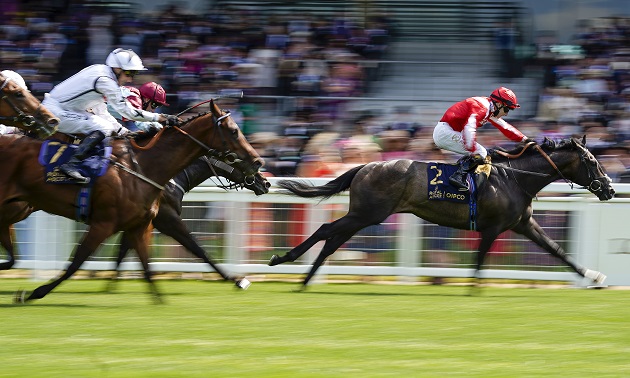 Nick Bradley reflected on Royal Ascot with pride after a busy and successful meeting for his syndicates.

Nick Bradley Racing had entrants on all five days of the Royal meeting, with Eldrickjones coming closest to victory when finishing second behind Berkshire Shadow in the Group 2 Coventry Stakes.

The son of Cotai Glory was beaten by a length and a quarter having started at huge odds of 66-1, and Bradley feels the Roger Fell-trained bay could have gone one better had luck been on his side.

“The two two-year-old colts ran really well, with Eldrickjones finishing second in the Coventry,” he said.

“I think if you ran that race again and it worked out slightly differently, he’d probably win.”

Bradley’s other two-year-old colt was racecourse debutant Kaboo, who finished sixth in the Windsor Castle Stakes after finding himself at the centre of a huge gamble that saw him backed from 66-1 down to 15-2.

“That was an almighty debut to finish sixth,” Bradley said of the colt’s run.

“Again, I think if you ran that race on a different day he’d be finishing better than sixth.

“Both are exciting colts to take forwards. We’ve only got three two-year-old colts in training, so for two of them to run so well at Royal Ascot, it says a lot about what we’re trying to do.”

The syndicate enjoyed a third-placed finish in the Group 3 Albany Stakes, a race they won last season with Dandalla, with George Boughey’s Oscula this time carrying the hopes of the partnership when galloping alone down the inside rail to cross the line two lengths behind the winner.

“We took a brave man’s tactic in that race, I sent both of them up the rail,” Bradley said of the tactics employed by Oscula and Hellomydarlin, his second runner in the contest.

“I said to the jockeys ‘if we get it right, you can claim the glory, if we get it wrong, it’s my fault’.

“I just thought, with the way the races were running previous to that, that the rail would be the place to be.

“We very nearly pulled it off. I think if we had won I would be smiling for a very long time, especially having won it the previous year.

“Mark (Crehan, jockey) gave her (Oscula) a great ride, she’s a filly that we didn’t pay a lot of money for competing against Dubawis and £400,000 yearlings.

“We were proud of her performance.”

Dandalla returned to the fixture after her success last year, this time taking aim at the Group 1 Commonwealth Cup and finishing fourth at 33-1 after failing to fire in previous runs at Newbury and Haydock.

“Myself and Karl always had faith in Dandalla, we knew that the engine was still there,” Bradley said.

“It was just a case of getting things wrong at Haydock and we’ve put the record straight.

“To put the record straight in a race like the Commonwealth Cup was very rewarding. Fourth in a race like that, behind two rockets that finished first and second (Campanelle and Dragon Symbol), it’s probably a career best run.”

After a busy Royal Ascot the syndicate will now look forward to Newmarket’s July meeting as their next target.

“We have had runners there every day of the week, I think we took over 200 owners there in total,” said Bradley.

“It was rewarding and we’re now going to look forward to the next one and try to get things right for fixtures like the Newmarket July meeting.”