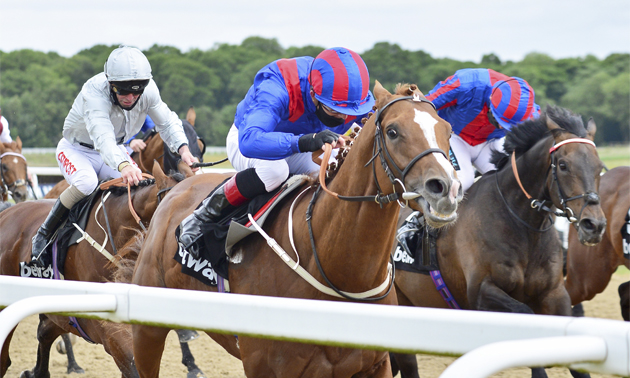 Nayef Road started his four-year-old campaign in the best possible fashion when holding off his stablemate Mildenberger to win the Betway Sagaro Stakes at Newcastle.

Both horses are now set to take their chance in the Gold Cup at Royal Ascot, where they will face Stradivarius, a horse who repeatedly frustrated Mark Johnston last season with Dee Ex Bee.

Nayef Road enjoyed a fruitful 2019, winning the Gordon Stakes at Goodwood and finishing third in the St Leger to Logician.

He looked an ideal candidate to make up into a top-class stayer this season, but was making his all-weather debut and coming up against classy sorts such as Withhold and Prince Of Arran.

Withhold attempted to make all, but Ben Curtis never let him get out of his sights and took up the running entering the final two furlongs.

Rainbow Dreamer, Prince Of Arran and last of all Mildenberger came out of the pack to challenge, but Nayef Road (8-1), in typical style for one from his yard, stuck gamely to his task to win by three-quarters of a length.

It’s a 1-2 for @Johnston_Racing in the rearranged Sagaro Stakes at @NewcastleRaces as last years St Leger 3rd NAYEF ROAD wins it from Mildenberger!pic.twitter.com/ylXSHJDse4

“He probably had the ideal campaign for a three-year-old last year if you were thinking of him making up into a top stayer,” said assistant trainer Charlie Johnston.

“He won the Gordon Stakes, was second in the Bahrain Trophy, third in the Queen’s Vase and third in the Leger.

“I was a little nervous as we’d done a lot of work with him in February and March with a view to going to Dubai and he was literally on the lorry when the meeting was abandoned.

“He then had an easy April and was only just ready in the last 10 days. Hopefully he’ll come on from today.

“I’ve just joked with Thady Gosden that at least we’ll make sure Stradivarius has to get out of bed in the morning.”

He added: “I’d say the first two will both go for the Gold Cup. I don’t think Mildenberger needs the all-weather, injury has meant he’s missed the last two summers and he’s run like he’ll be suited by another half a mile, they both have really.”

Champion all-weather rider Curtis said: “Everything went perfect, Nayef Road stays well and all went to plan. I got a lovely position from stall 10 and he travelled round beautifully. When I went for him he put the race to bed, it was an armchair ride for me.

“I sat down with my agent and we said we’d go for quality over numbers. With two Group Three wins (this week) I have to pinch myself, I didn’t think it would go that well.

“It was great to get the ride, I was lucky to fall on to one like that. I’ve not had many rides for Mark Johnston so it was nice to get him a winner.”

The winner was given a 20-1 quote for the Gold Cup by Paddy Power.