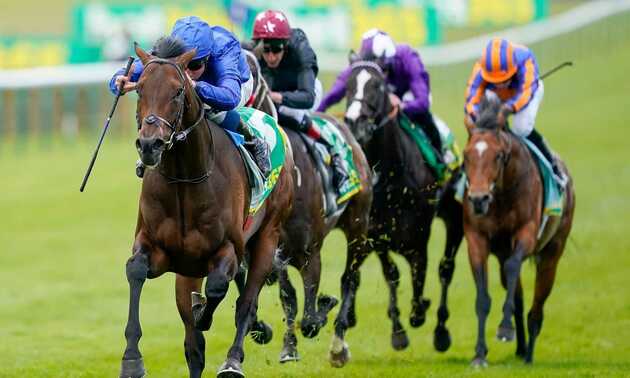 Charlie Appleby completed a Guineas treble as his Newmarket runner-up Native Trail obliged favourite backers in the Tattersalls Irish 2,000 Guineas at the Curragh on Saturday.

Last year’s champion two-year-old had to give best to his stablemate Coroebus in the first Classic of the summer on the Rowley Mile, but made no mistake this time around for Appleby, who also landed the Poule d’Essai des Poulains with Modern Games.

The 2-5 winner was settled in mid-division in early stages alongside Aidan O’Brien’s Ivy League and nearest market rival Buckaroo, but it was the Oasis Dream colt that responded best when called into action by big-race jockey William Buick.

As Wexford Native was taking over from long-time leader Malex, Buick was winding up his charge and hit the front heading into the final furlong of the contest.

As Wexford Native was taking over from long-time leader Malex, Buick was winding up his charge and hit the front heading into the final furlong of the contest.

Native Trail then showed a willing attitude to keep on gamely under his rider’s urgings and hold off fast-finishing duo New Energy (40-1) and fellow UK raider Imperial Fighter (28-1), who picked up well past beaten rivals in the closing stages to claim the podium spots.

Appleby said: “To be honest, I was delighted the rain didn’t come, for a big horse and a horse with his action I’m always more confident when he’s on a sounder surface.

“I wasn’t going to give an excuse coming into today that the slower side of good would be a negative, I’m a believer that good horses can get through, but I’m delighted it’s raining now and not before the race.

“I was confident in William and the horse, William knows him so well and has ridden him all of his racing career and plenty at home. He knows what this horse can do.

“The thought process before the race was to try to get out and get a box seat but once it wasn’t there, I could see what William was doing. It was one of those nice races to watch.

“I knew once he angled him out, gave him the office and told him to go to work it’s the one thing this horse doesn’t do, he won’t falter. When you ask him, he’ll give it to you. He’s done it in spades in the end.”

Appleby is the first trainer since Aidan O’Brien in 2002 to land all the three versions of the Guineas in the same season.

While the Ballydoyle handler did it with two colts in Rock Of Gibraltar and Landseer, Appleby is thrilled to have achieved the feat with three individual runners.

He added: “I’m delighted for the whole team, delighted for Godolphin and Sheikh Mohammed. To do what’s been done over the last month is a huge achievement, more importantly for the team at home and for his Highness.

“It’s the first time it’s ever been done with three different colts in the three Guineas. It’s a huge achievement for everybody and I’m delighted to be part of it.

“I knew coming into today, as calm and collected as you try to be, I knew what we were trying to achieve. Firstly trying to win a Guineas but, dare I say, trying to make history. That’s what this horse has done for the whole team today.

“It was more pressure than sometimes I’m used to.”

Native Trail was clipped to 5-1 from 6s by Betfair for the St James’s Palace Stakes following the race and asked about Royal Ascot plans, Appleby added: “Those discussions will take place over the next few weeks.”

Sheila Lavery was delighted with the effort of New Energy who made a huge leap in level to be beaten a length and three-quarters.

She said: “I’m thrilled and I was really looking forward to running him. He has run four times and he won his maiden here first time, but in the other races he hasn’t been able to get a proper lead.

“In the Tetrarch he had to lead and we weren’t quite sure exactly what we had.

“Billy (Lee) gave him a beautiful ride and the only thing is my heart goes out to Robbie Colgan, who would have been on him except that he got injured off a horse at my place a couple of weeks ago. He’ll be back riding on Tuesday.

“It was just fantastic and I’m delighted for John (Lavery, owner) who has put so much money into it, and faith in me. Ted Durcan and I bought him.

“We put him in the St James’s Palace but we could always have dropped back to the Jersey.

“Billy thinks he’s still going to improve from that, because he’ll have learned from that.

“I think we’ll go to the St James’s, why not live the dream?”

Ascot could also be on the agenda for the three-quarter-length third Imperial Fighter, according to his trainer Andrew Balding.

He said: “He ran a smashing race. He probably, ideally, could have done with the ground even softer, but he is fairly versatile. I haven’t heard any more than that. It looked like Ben (Coen) gave him a really good ride.

“I was thinking we could go a mile and a quarter in the Hampton Court, but it depends. If Ben says a mile is his trip, he won’t be going there.”

Buckaroo was sent off the 3-1 second favourite for Joseph O’Brien but could finish only sixth.

The trainer said: “He was a little bit disappointing. They went quick and we’ve never really looked like we were going to fire.

“We’ll see how he pulls up and take it from there.”