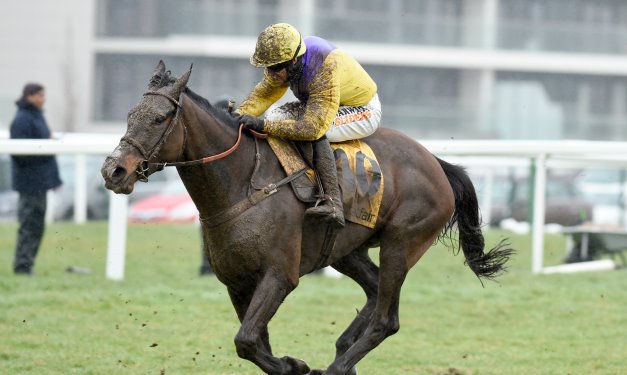 Trainer Amy Murphy has set her sights on the 2019 Cheltenham Festival as she readies stable star Kalashnikov for the Arkle Trophy.

Having watched Kalashnikov finish agonisingly close in last season's Supreme Novices' Hurdle, the up-and-coming Newmarket-based handler is keeping her fingers crossed that he can go one better on his Festival return next year.

Despite coming so close at Prestbury Park in March, victory in the Betfair Hurdle at Newbury ensured that near-miss was not the overwhelming memory of the season.

The novice Kalashnikov is victorious in the Betfair Hurdle at @NewburyRacing! Watch LIVE on @ITV4 pic.twitter.com/AHBrMJoREv

"Last year we only had eight jump horses, so to have found a gem in Kalashnikov is unbelievable," said the trainer.

"The Betfair was very surreal for me as the likes of Willie Mullins and JP McManus have been idols to me and for them to turn around and be congratulating us made it a special day.

"Jack (Quinlan) rode to an absolute tee at Cheltenham. He couldn't have done any more to help the horse. It was a big day for a team of our size to be competing at Cheltenham with a live contender, and to run like one - it was a phenomenal day.

"He was always going to be turned away after Cheltenham as he was a big, raw horse. He needed a good summer holiday as he had some tough races.

"He is fresh and well and has done well over the summer. Touch wood he stays sound, but we are pleased with him at the moment."

Although nothing has been finalised as of yet, Murphy does have her eye on a possible outing at Plumpton.

She added: "Fences are what he is bred for. When you have a live contender for Cheltenham I think you would be mad not to look at a race at Plumpton with the bonus they have (for going on to win at Cheltenham).

"He will start off low key and if Plumpton fits, then great. Everybody wants to be at Cheltenham and that will be our target again."