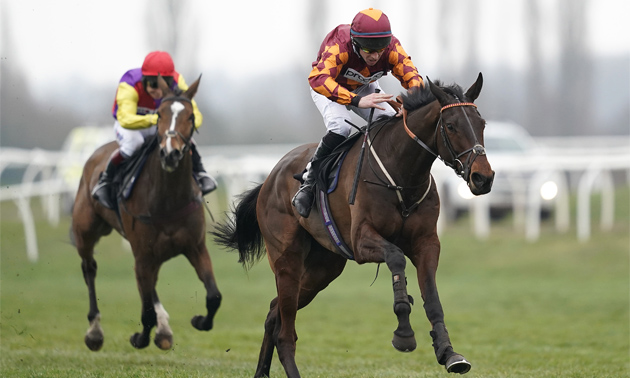 Warren Greatrex is confident there are plenty of big days ahead for Emitom following his encouraging run in defeat in the Paddy Power Stayers' Hurdle.

The lightly-raced six-year-old put up a career-best performance to finish fourth on his return to Grade One company in the three-mile contest the Cheltenham Festival.

With Emitom proving he can act around Cheltenham and his jumping much improved, the Lambourn handler is excited by what the future holds.

Greatrex said: "He went through the race brilliantly and jumped much better. There was a question whether he would handle Cheltenham, but I think that proved it is no issue to him.

"He winged the last and has beaten some good horses like Summerville Boy and Paisley Park, so we can take a lot of credit from that.

"He is only six and is maybe still a bit weak to get home properly in a race like that, but he has run very well and from my point of view the most exciting part is there is plenty more there. There is a lot to look forward to."

Although Emitom is up there among the best staying hurdlers in the country, Greatrex has not ruled out the possibility of switching him to fences next season.

He said: "With no Aintree and no overseas runners likely to be allowed at Punchestown, that is him done now for the season.

"We will see what happens when he comes back in as to whether we stay over hurdles or go novice chasing.

"He could be an extremely good chaser and that could help his jumping even more, it would give him more to look at."

Greatrex believes Bob Mahler is an ideal candidate for next year's Randox Health Grand National following his staying-on third in the Fulke Walwyn Kim Muir Challenge Cup at the Festival.

He said: "Out of all my runners at Cheltenham, I fancied him most and he proved me right. He was just outpaced at two out and then he stayed on better than anything after the last.

"He has been progressive all season and all roads will lead to the Grand National. We might look at the Becher next season to give him a look over the fences first.

"He does need to go up a few pounds to get in, but he is unexposed and is a dour stayer that is a good jumper and if ever I've had a horse for the race, it is him."

While stable star La Bague Au Roi, who unseated Richard Johnson in the Brown Advisory & Merriebelle Stable Plate on her latest start, has failed to register a win this season, Greatrex is optimistic she still has plenty to offer.

He said: "She unseated a long way out at Cheltenham, it was just a case of Dicky asking for a big one and the pair just had a bit of miscommunication. Had that not happened, I would have been surprised if she wasn't there at the end.

"I feel there is unfinished business there. She had a hard season last season and I think that left it's mark until Christmas, then a few little things went against her.

"She is rated 149 so we can have a look at handicaps, but with her 7lb mares' allowance, I still think she could nick a Grade One."

Mulcahys Hill could be given a change of scenery having finished down the field in the Ultima, with Greatrex considering running the eight-year-old over cross-country fences next season.

He said: "It was slightly my fault in the Ultima as I put the cheekpieces back on and he seems to sulk wearing headgear, he seems to be a horse that likes to look around.

"We have got options next season, but we have discussed going down the cross-country route with him."