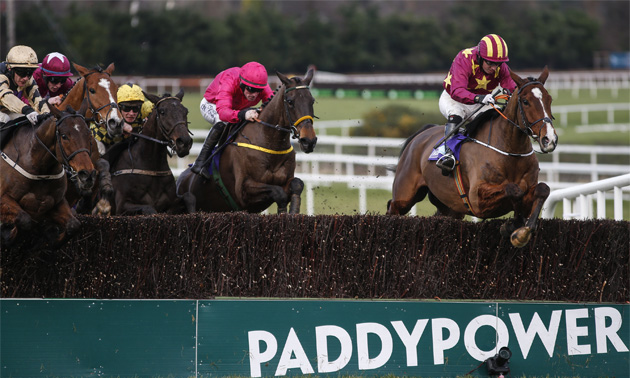 Henry De Bromhead hopes Monalee can build on his Cheltenham Gold Cup fourth by claiming a first win in more than a year in next month's Punchestown Gold Cup.

Although running some solid efforts in defeat this season, Monalee, who pulled up in the Punchestown feature 12 months ago, has failed to get his head in front since landing a Grade Two at Gowran Park last February.

While De Bromhead has praised the nine-year-old's brave effort in defeat in the Gold Cup, he believes interference he suffered in running worked against the Grade One winner from securing an even better result

He said: "It was a brilliant run in the Gold Cup. He was a bit unlucky as he got hit across the face going up the hill, which didn't help him, but the stewards said it was accidental.

"He got murdered at the top of the hill, but these things happen. However, he did run a blinder.

"He has always been a very good horse and we were happy with the run, but those things certainly didn't help us.

"I would think he would go for the Punchestown Gold Cup if it is on."

Minella Indo could be another to try to gain compensation at Punchestown, with De Bromhead earmarking an outing in the Dooley Insurance Group Champion Novices' Chase for this year's RSA runner-up.

He said: "He ran a cracker andjust got done out of it late on by Champ. Who knows if we would have would won had we met the last right, as Barry (Geraghty) got a real surge out of Champ and fair play to them.

"We would consider the three-mile-one novice at Punchestown. We've not made any plans, but we would certainly consider it if there is any racing on by then."

Having been impressed with Minella Indo over fences this season, De Bromhead is confident he can continue his progression and develop into a genuine Gold Cup contender next term.

He said: "We would hope he is a Gold Cup horse next season, but we have got to see how good this season's novice chasers are.

"He is a horse we hoped would be one to run in those types of races."

Aspire Tower is likely to try to go one better than in the Triumph Hurdle in the Champion Four Year Old Hurdle at Punchestown, although de Bromhead has not ruled out a switch back to the Flat after giving him an entry in the Group Three Vintage Crop Stakes at Navan.

He said: "He jumped terribly and I thought he landed flat-footed at every hurdle. He kept jumping left and he even ran down the last while he screwed out at the first.

"Whether this was all from his Leopardstown fall or not, I'm not sure, as he had been jumping brilliantly at home.

"We have entered him in the Vintage Crop Stakes as it just gives us another option. It was an early closer so there was no harm entering him. I would probably say that Punchestown is more likely, though."

De Bromhead is weighing up two options at Punchestown for Honeysuckle after she extended her unbeaten record to eight under rules with a fourth Grade One victory in the Close Brothers Mares' Hurdle at the Festival.

He said: "We are aiming towards Punchestown with Honeysuckle. We had mentioned the mares' hurdle for her but there is also the Champion Hurdle.

"We will see nearer the time how we feel, but we haven't made a firm decision yet. She seems in good form."

Surprise Arkle winner Put The Kettle On could further strengthen De Bromhead's hand at Punchestown by trying to bag a second Grade One success in the Ryanair Novices' Chase.

He said: "She has been in great form since Cheltenham and there is not a bother on her.

"If everything keeps going then we will probably aim for Punchestown."