Mohaafeth primed to do battle in Derby 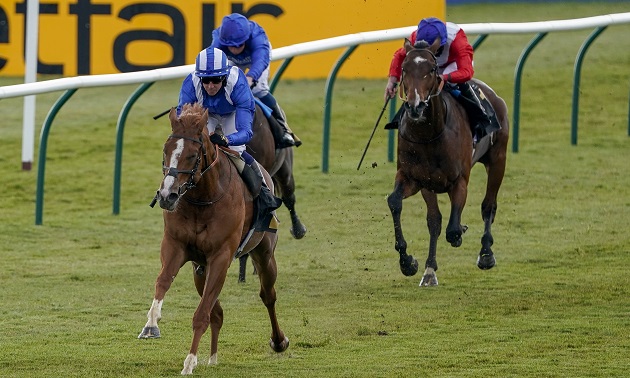 William Haggas is confident his fast-improving colt Mohaafeth will be “up for a fight” in next month’s Cazoo Derby.

Mohaafeth shot to prominence in the ante-post market for the Epsom Classic on June 5 when he completed his hat-trick with a highly-impressive victory in the Listed Newmarket Stakes at the start of this month.

Haggas reports Mohaafeth has been in fine form since that second of back-to-back 10-furlong wins at HQ.

His next foray away from the Newmarket trainer’s yard may well be for a racecourse gallop en route to Epsom – rather than taking up the opportunity of acquainting himself with the course by exercising there in the week before the Derby.

Haggas said: “He’s great. We won’t take him to Breakfast with the Stars, but we might take him away to a racecourse.

“We don’t really need to go, but he just needs a couple of good bits of work on the grass.

“But we are getting rain at home, so we’re able to work them on the grass - which makes a big difference.”

😲 Talk about a steering job...

🏇💪 @JimCrowley1978 must have been blown away by the way in which MOHAAFETH stamped his Derby credentials at @NewmarketRace over the weekend to bring up the hattrick...

“I thought Aidan’s horse in Ireland was the best – that will be the one that will take the beating, I think,” he said.

“But if you’re not in, you can’t win – and if he gets there he’ll have a chance. Our horse is doing really well, but his form is not there yet.

“He beat very little at Newmarket, but he was very impressive. We’ll find out there if he can get to the next level.”

After his five career starts and on his steep upward curve, Mohaafeth will not lack for experience – or, Haggas stresses, determination.

“He’s hard mentally and physically – and he’ll be up for a fight.”

Victory next month in the famous blue-and-white colours would, of course, be poignant after the death in March at the age of 75 of Shadwell’s founder Sheikh Hamdan Al Maktoum.

Haggas said: “I was thinking the other day how sad it is, because Sheikh Hamdan would ring a lot when he had some good horses – and he would be really enjoying this year as we’ve some nice horses for him.