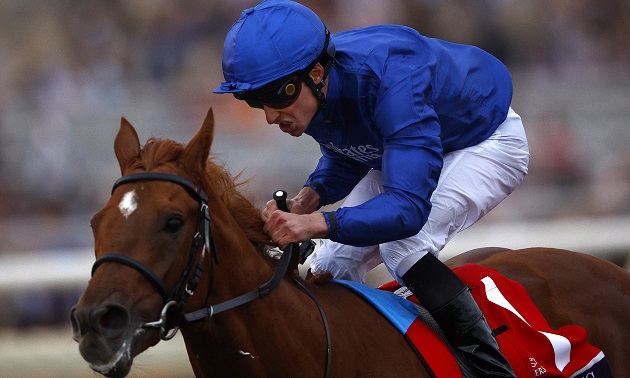 Modern Games was an impressive winner of the Emirates Poule d’Essai des Poulains at Longchamp for William Buick and Charlie Appleby.

Modern Games was the 7-4 favourite after a juvenile campaign that ended with a Grade One victory in the Breeders’ Cup Juvenile Turf at Del Mar in November.

Breaking well and ridden handily on the inner of the group of 15, the Dubawi chestnut was chased home by 66-1 shot Texas when securing a length and a quarter triumph.

Appleby – who won the Newmarket 2000 Guineas with Coroebus – told Sky Sports Racing: “He was the class horse in the race on all two-year-old form and I was just delighted with the weather conditions we’ve had over the last few days – if there’s one thing he loves it’s quick ground.

“When the draws came up, we just grew in confidence. His home work’s been good, we took him away there to Newmarket a couple of weeks ago and he did a piece of work there that we knew he’d come forward for.

“It was a great ride by William, our plan was to jump to make it (the running) and let someone come and take it off of us from that draw.

On the likelihood of taking on the French Derby, the Prix du Jockey Club, at Chantilly – a double done by St Mark’s Basilica 12 months ago – Appleby said: “He’s so game and honest, it’s definitely worth a crack with him. We’re very spoilt with the three colts that we have in Coroebus, Native Trail and Modern Games.

“It would be nice to keep them apart for as long as we can, eventually they might end up having to lock horns but I see no reason not to let this horse have a go at it.”

Buick added: “I was relatively happy with the run we had round, he’s a horse who goes through his gears nicely so he had plenty of time to get into top gear today.

“He loves that ground, it’s beautiful ground out there, good, fast ground.”

Buick echoed Appleby’s suggestion that the Jockey Club could be the ideal next outing, saying: “I think it seems like a natural step for him and I think he’s worth a try at the trip.

“In the Jockey Club you need a lot of tactical pace, it can sometimes be a difficult race and I think he ticks a lot of boxes for the race.

“He’s a true professional, he really is a joy to ride and a joy to be around. He takes everything in his stride, he’s a very good horse and he makes life for his jockey very easy.”

Cachet just missed out as Mikel Delzangles’ Mangoustine prevailed after a thrilling finish to the Emirates Poule d’Essai des Pouliches at ParisLongchamp.

The filly was placed third at the same track in the Prix de la Grotte in April, coming home behind Rosacea in a race that often acts as a trial for the French 1000 Guineas itself.

Rosacea was the favourite for French Classic as a result, but it was 12-1 chance Mangoustine who was able to reverse the form under Gerald Mosse when denying George Boughey’s Newmarket Guineas heroine Cachet by just a head in a tight group finish.

“After a year investing in this world, I never thought I’d be winning a race like this.

“I just want to say thanks to everybody, it’s really a team effort and it’s unbelievable.”

When asked how the victory compared to his NBA successes, Parker said: “It’s kind of similar, it can’t be better than this. It’s a big race, it’s one of the best races in the world, so to win this with Mangoustine is unbelievable.

“Maybe we will come to the UK, I know that if she went well today we would think about Ascot. We’ll see, we’ll talk with the coach, but if the next thing is the UK that would be great.”