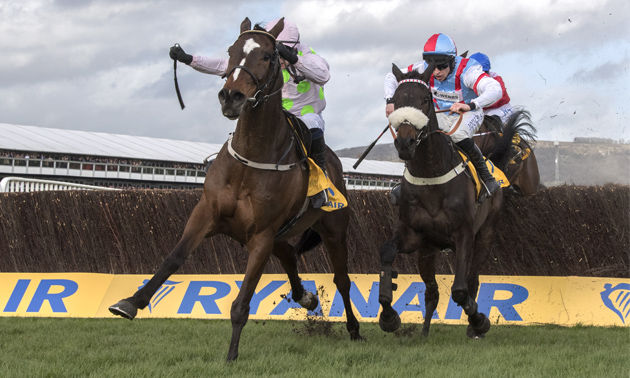 Last year’s winner Min is one of 50 entries for the Ryanair Chase at the Cheltenham Festival in March.

Having previously chased home Altior in the Supreme Novices’ Hurdle and the Queen Mother Champion Chase, the Willie Mullins-trained Min finally enjoyed his day in the sun at the showpiece meeting 12 months ago.

Having kicked off the current campaign by winning his third John Durkan Memorial Punchestown Chase, the 10-year-old is the ante-post favourite to successfully defend his Ryanair crown and become just the second dual winner after Albertas Run (2010 and 2011).

An 11-strong Mullins contingent also includes Allaho, Chacun Pour Soi, Kemboy, Melon and Tornado Flyer, although several have alternative engagements in one or both of the Queen Mother Champion Chase and the Cheltenham Gold Cup.

Other contenders for the Ryanair include last year’s runner-up Saint Calvados, trained by Harry Whittington, Henry de Bromhead’s Savills Chase winner A Plus Tard, Nicky Henderson’s superstar chaser Altior and Kim Bailey’s Imperial Aura, who is set to run in the Silviniaco Conti Chase at Kempton this weekend.

Bailey said: “Imperial Aura is in good form and he runs on Saturday – that race is essentially his prep run for the Cheltenham Festival, where he will hopefully line up in the Ryanair Chase.

“He won at the Festival last year and I have been delighted with his performances so far this year.

“I am very happy with him and Saturday should hopefully tell us more, but Cheltenham is definitely a target for him.”

Amy Murphy is considering multiple options for Kalashnikov ahead of a likely tilt at the Ryanair.

Having shaped with promise when seventh on his reappearance over hurdles at Haydock, Murphy’s stable star was a well-backed favourite for the rescheduled Peterborough Chase at Cheltenham last month and emerged with plenty of credit in finishing second to Mister Fisher.

She said: “Kalashnikov in great form. He’s been in very light work since Cheltenham – we haven’t done a lot with him at all.

“We’ve freshened him up. He’s received an entry in the Ryanair Chase at the Festival and he’ll have one more run between now and then.