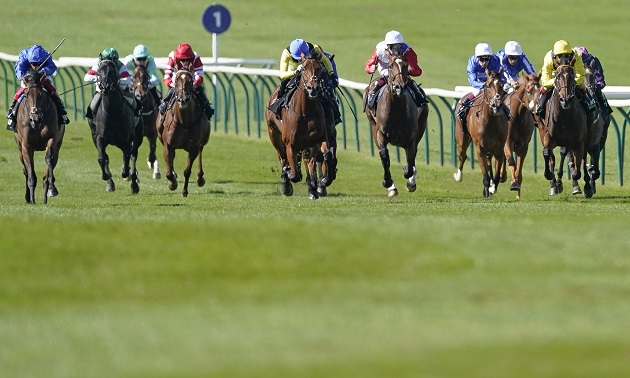 Perfect Power will cement his position as the pre-eminent juvenile over six furlongs this season if he can come out on top in the Juddmonte Middle Park Stakes at Newmarket.

Richard Fahey’s Ardad colt won the Norfolk Stakes at Royal Ascot in June from Go Bears Go, who quickly franked the form in the Railway Stakes in Ireland.

Perfect Power was then strongly fancied in the Richmond at Goodwood – but wherever the luckless Paul Hanagan went that day, he seemed to find trouble and was beaten just over a length into fifth behind Asymmetric.

He was extremely impressive in the Prix Morny at Deauville, however – displaying an electric turn of foot under Christophe Soumillon, who keeps the ride.

“Obviously we were all delighted with the success in France, and Richard says he has got him spot on – he’s very happy with him.

“Hopefully he’ll win while the owner is in town. The hope is he’ll be there, and it will be great if he can win while he is.

“He’s won on quick ground at Ascot, so that won’t be a worry to him, but I wouldn’t be surprised if they put a bit of water on because it’s been a bit breezy.

“Good, fast ground should be perfect. It’s what you want for a meeting like this, when you are trying to find the champions.”

While Perfect Power remains over six furlongs for now, the hope is he may stay further next season.

“At this stage, whether he’ll stay any further we’ll just have to play it by ear, but we know he’s got plenty of speed.

“We’ll hope he gets a mile and we’ll maybe start off looking that way. We might find out a bit more in this, and we’ll see how he handles the track.

“With a horse of his calibre, you are always hoping they will be OK for the Guineas.”

One horse who looks sure to stay further next season is the Ger Lyons-trained Dr Zempf.

Fourth in the Railway Stakes on just his second start, he turned that form around with Go Bears Go and Castle Star in the Phoenix – in which he found only Ebro River too strong.

“His work has always been impressive, but we’ve always trained him with next year in mind,” said Lyons.

“I would much rather be going over seven furlongs with him, but we are erring on the side of weakness at the moment. Colin (Keane) has always said ‘stick to six with him for the moment’.

“I think it is the six furlongs that has been getting him beat up to now. Colin said he would reverse the form of the Railway Stakes, and he was right, but then we bumped into one in the Phoenix.

“The Dewhurst is not out of the question. We’ll see what happens on Saturday – he’s had a light season, and I can’t wait to see him over seven.”

David Loughnane remains convinced there is a Group 1 in Go Bears Go, who has had a break since the Phoenix.

“He’s not let us down yet, so it’s all systems go,” said Loughnane.

“He was my first runner in a Group 1 in the Phoenix when he was third, and he’s my only one.

“The winner franked the form in the National Stakes, so we’ll be going confident that he’s a Group 1 horse.

“He seems in a great place. We gave him a little break for a freshen-up after the Phoenix, and I couldn’t be happier with him at the moment.

“It’s a tough race, but he is definitely a Group 1 horse, so fingers crossed he gets the rub of the green.”

Clive Cox is rolling the dice with Caturra, who finished strongly to deny Morny fourth Armor in the Flying Childers over five furlongs at Doncaster.

The Lambourn trainer said: “Obviously this is another step back up in trip to six furlongs – but with the dry ground and his well-being, I’m pleased that we’ve got an option to run at the next level, having won his Group 2.”

Armor tries again for Richard Hannon, with the Morny form further represented by Alan King’s Asymmetric – who was third at Deauville.

Fozzy Stack’s Castle Star renews rivalry with Go Bears Go and Dr Zempf, and Aidan O’Brien has an interesting contender in HMS Endeavour – who has won the last two of his three starts.

The Michael O’Callaghan-trained Twilight Jet was third in the Champagne Stakes at Doncaster and adds further strength to the Irish challenge, which is completed by another O’Brien runner in the shape of the twice-raced maiden New York City.