Menuisier could be tempted by Irish Derby with Lionel 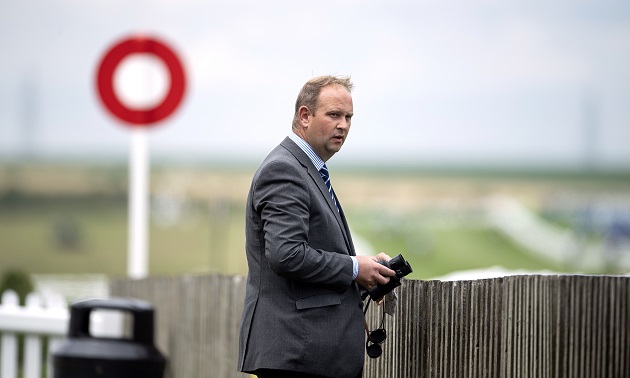 Lionel broke his maiden and in the process opened up a wealth of big-race options – including the Irish Derby – with victory in the British Stallion Studs EBF Cocked Hat Stakes at Goodwood.

Trained by David Menuisier, Lionel had caught the eye when third on his reappearance at Newbury behind Natural World.

He had been declared for the Lingfield Derby Trial but his trainer felt the ground was too quick there and decided to bide his time.

That now looks a smart move, as despite being friendless in the market at 17-2 in a field of just six, Lionel, who was outpaced at halfway, demonstrated stamina in abundance at the finish for Jamie Spencer.

Frankie Dettori attempted to dictate matters from the front on the heavily-backed Aldous Huxley, but he was challenged on all sides by Lysander and Maksud.

Just as if it looked like Dettori’s mount had done enough, Lionel’s stamina kicked in late in the day and he won going away by a neck with half a length back to the William Haggas-trained Lysander.

“I am emotional because I thought he was beaten two (furlongs) out,” said Menuisier.

“The form of the yard coming into this was not brilliant. A lot of people talk about statistics. When you train racehorses, you don’t want to look at statistics too much. We have been proving for long enough that we are not too bad at training racehorses.

“He had no luck at Newbury. We lost the race at the start. He went into the stalls and it was all new to him. Now he knows how to win and hopefully he will keep going.

“The plan was to ride him a bit handier, but he couldn’t be handier.

“I don’t regret taking him out of the Derby – I am going to win with Sir Bob Parker – the main reason why we took him out of the Derby, and obviously it was a concerted discussion, was because we feel he is probably too weak mentally to handle the prelims. He is too immature. I don’t want to frighten him.

“We want to bring him on gradually. I think he is a very good horse, I have always said that, but he wants to be a grown up to win at Epsom and he is not.

“Doncaster in September (St Leger) is a good possibility. The dam (Gretchen) won a Group Two (Park Hill Stakes) there and he will stay well in time. But he has got pace to win over one mile and four. I think the Curragh over one mile four sounds like a good idea. He is entered in the Arc and entered everywhere.”

The connections of Lysander were not too down heartened by his display back in third.

“He wasn’t beaten too far and we are mulling over what we do next. It wasn’t a bad run, but the ground was too soft for him. He had a hard race, but I would hold on to those Derby tickets a while longer. We will see how he takes this,” said Harry Herbert, managing director of owners Highclere Thoroughbred Racing.

Sea Silk Road continued the red-hot recent run of William Haggas with a determined success in the William Hill Height Of Fashion Stakes at Goodwood.

A daughter of Sea The Stars, she was upped to Listed company having had just two previous outings but that did not prevent her from being sent off the 11-10 favourite.

Tom Marquand briefly looked short of room trapped in behind horses with a furlong and a half to run, as Jessica Harrington’s Viareggio made her bid for home, with Frankie Dettori on Emotion also to the fore.

All the while William Buick was smuggling Eternal Pearl into contention on the far side and she proved Sea Silk Road’s only danger when Marquand got her in the clear.

The front two pulled almost four lengths clear of Viareggio, with Haggas adding another notable victory in what has been an incredible week with the yard operating at a strike rate of almost 50 per cent.

“I think she is a promising filly and I’m pretty convinced she didn’t like that (soft) ground at all. It was her guts that got her though today, I think – and so did Tom, who said she was off the bridle three out and in trouble, but she wants to win,” said Haggas.

“She is a Sea The Stars and they can do anything. He is such a good sire. I think she will change (physically) and keep getting better and she might need some more time, but she has come a long way in a short space of time.

“I think she will get further as she gets stronger. The dam is by Doyen and they stay. I doubt we will put her away and bring her back. It is quite a hard thing to do, when the horses are running like they are at the moment.

“The Ribblesdale might be a bit quick, but we will see how she is.”

The winner is now 10-1 from 16s with Betfair for the Ribblesdale Stakes at Royal Ascot.