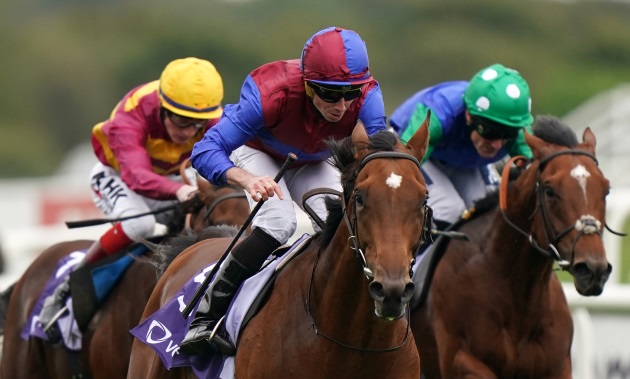 Luxembourg was made to work hard for victory as he returned to action in the Fitzdares Royal Whip Stakes at the Curragh.

Aidan O’Brien’s colt was a Group One winner at two and finished third in the 2000 Guineas at Newmarket on his only start so far this term, with a muscular issue scuppering a planned Derby run and keeping him sidelined for most of the summer.

However, confidence was high on his Group Three comeback at the Curragh with Luxembourg sent off the 2-9 favourite in the hands of Ryan Moore.

Taking on five rivals, Luxembourg was niggled along at the top of the straight and while he eventually moved to the front, Insinuendo was poised to challenge after switching to get a run.

The mare appeared to be getting the upper hand inside the 10-furlong distance, but Luxembourg really stuck his head out and was rewarded for his efforts with a neck verdict.

When asked if he was relieved, O’Brien said: “Very, we didn’t think he’d ever get here.

“We thought that he had no chance of running after what happened to him. Everyone did a great job to get him over his first mishap, he was off for a long time.

“Then he came back and it wasn’t smooth with him. Jamie who looks after him did an incredible job.

“I didn’t think he’d get here, our eye was on the Irish Champion Stakes and obviously we knew you couldn’t go to a Champion Stakes without a run and this was the only place we could run.”

O’Brien was pleased with how the race panned out and how Luxembourg rose to the challenge.

He added: “First time back we didn’t want a grueller because he was only ready to start. It was brilliant really because they didn’t go too fast and he had to quicken and run hard for the last two (furlongs), which he wanted to do before he’d go into a big championship race.

“We were over the moon. We knew Willie’s (McCreery) filly was a good filly (Insinuendo) as we’d ran against her earlier in the year.

“They ran hard the last two and Ryan gave him a lovely ride and taught him. He had to sprint the last two furlongs and I couldn’t be happier.

“Ryan said he moved up, got there and just shut down. He’s used to doing that in his work, just getting there and coming with horses.

“Obviously he wouldn’t have been edged up in any way. A lot of his work would be physical core work rather than sharpness, because he wasn’t ready to start sharpening.

“We were only going to have one race to sharpen him and then we could take him home and get the rest.

“I can’t tell you how delighted we would be with him. He’s a horse that can go a very high tempo and quicken off it.

“Ryan was very good on him. He had to wake him up, make him get down and do it without being too serious on him. He was brilliant at that and he found when he had to find.

“Going to the line he was coasting again.”

Coral go 5-1 about Luxembourg’s chances in the Royal Bahrain Irish Champion Stakes on September 10, while the same firm left him unchanged as a 14-1 shot for the Prix de l’Arc de Triomphe.

O’Brien said: “The plan was to go on to the Champion Stakes. We came here with High Chaparral before and he came on lovely from it.

“This horse had a lot more to come on because he had a big set-back but we could not be happier with that.

“I thought he would improve 20 to 30 per cent from today. Hopefully now he comes out of it OK.”