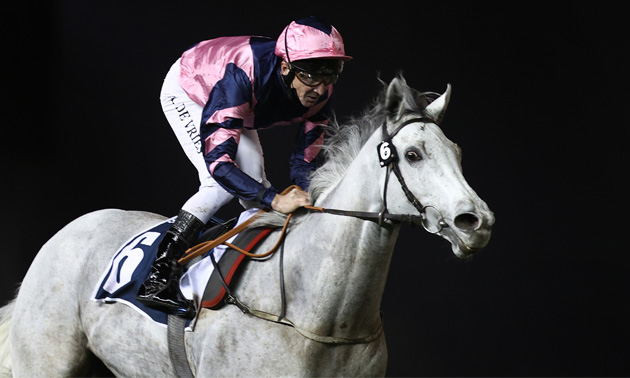 Lord Glitters returned to his best when producing a power-packed finish to land the Group Two Singspiel Stakes at Meydan.

The David O’Meara-trained grey was winning for the first time since the Queen Anne Stakes at Royal Ascot in 2019 – with that Group One success coming three months after he had finished third in the Dubai Turf.

That nine-furlong heat on World Cup night could again be on the agenda, after Lord Glitters ran out a convincing winner over that distance in the hands of Adrie de Vries. The Dutch jockey was replacing Danny Tudhope who was unable to make the trip to Dubai.

The eight-year-old only had two horses behind him turning into the straight, but once he hit top gear it was a one-horse race.

Lord Glitters powered to victory by three lengths from Zakouski, with Dream Castle a length and a half away in third place.

Back to winning ways!👏

LORD GLITTERS wins for the first time since landing the 2019 Queen Anne, staying on strongly to take the (Group 2) Singspiel Stakes at @MeydanRacing for @omeararacing! 🏇pic.twitter.com/p9Jf0Iv8I3

Speaking from home, North Yorkshire-based O’Meara said: “It’s a mighty performance – an eight-year-old and still running to that level. It’s brilliant and he was given a great ride by Adrie de Vries.

“He ran a lovely race in Bahrain in their big race before Christmas, finishing his race very well. We were hoping he was in good form going out there and that he would be competitive. It worked out very well for him.

“The last time he ran at Meydan in the Dubai Turf he ran Almond Eye and Vivlos quite close, giving them their fillies’ allowance.

“He’s actually run a really good race there before so he copes with the track well.”

Lord Glitters could well race again before having a second crack at the Dubai Turf on March 27.

O’Meara added: “You’d like to think the Dubai Turf would be the target. There’s a bit of water to go under the bridge before then. There might be a race in February and hopefully on to World Cup night. He’s staying over in Dubai.”

Lord Glitters earned a quote of 6-1 for the Dubai Turf with Paddy Power.

Military March was a disappointment on his first run for Godolphin and trainer Saeed bin Suroor since his fourth in the 2000 Guineas at Newmarket in June, finishing eighth.

However, Bin Suroor and jockey Frankie Dettori made amends on Land Of Legends in the Group Two Al Fahidi Fort – the last of the five races on the card in which they teamed up together.

Land Of Legends is a smooth winner of the Group 2 Al Fahidi Fort for Saeed bin Suroor and @godolphin @FrankieDettori #DWCCarnival pic.twitter.com/nmbjjvjiav

It was a first success in Dubai for Dettori since he won the Godolphin Mile on African Story for Bin Suroor in 2012.

The Italian produced the five-year-old to perfection to lead inside the final furlong and land the spoils by three-quarters of a length and the same from the Charlie Appleby-trained pair of D’Bai and Glorious Journey.

Dettori – who performed his trademark flying dismount – said: “I had the perfect trip. I was sat behind the leaders and got the split at the right time.

“It was a good effort, but everything fell right. We had a good draw and I managed to get him into a nice rhythm and he won.

“Honestly, I’m delighted. We had high hopes all night and we managed to get one in our last race together today, so I’m pleased for Saeed and the team. It’s nice to be back.”

Bin Suroor said: “Isn’t it great to see Frankie back, winning races and riding as well as ever. We have been friends for about 27 years.

“This horse has been working very well and showing lots of speed at home, so we were hoping for a big run but he will improve for that because he had been off since March.”

Dettori completed a double when steering the Charlie Hills-trained Equilateral to victory in the Dubai Dash.

Always prominent as Caspian Prince helped set a scorching pace, Equilateral quickened nicely to follow up his victory in the race from 12 months ago.

Of being back in Dubai, where he has enjoyed so much success for Bin Suroor in the royal blue of Godolphin, Dettori, who celebrated his 50th birthday in December, said: “I’m really enjoying my time here, maybe because I’m running out of years but I’m trying to taking it all in.

“Most people are locked in their houses doing nothing, and at least I get to do what I love. I am going to stay here in the United Arab Emirates until Super Saturday (March 6).”

Military Law took round one of the Group Two Al Maktoum Challenge for trainer Musabbeh Al Mheiri in the hands of Antonio Fresu and was cut to 6-1 from 10-1 for the Dubai World Cup with Paddy Power.

Switzerland caused a 50-1 upset in the Group Three Dubawi Stakes beating Gladiator King, his Satish Seemar-trained stablemate and the 1-2 favourite, into third place under Tadhg O’Shea.