Lezoo has the answers in Cheveley Park Stakes 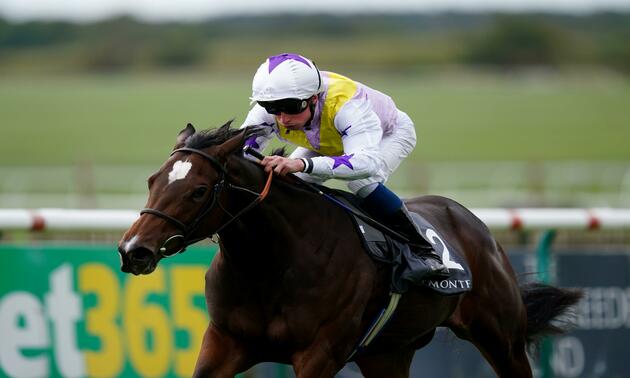 Ralph Beckett once again exhibited his prowess at training fillies as Lezoo flew up the Rowley Mile to land the Juddmonte Cheveley Park Stakes at Newmarket.

It was Lowther winner Swingalong that led a quality field along, with Albany Stakes scorer and 13-8 favourite Meditate also close to the pace in the hands of Ryan Moore.

William Buick had the winner covered up in mid-division in the early stages, but it was when pulled out into daylight approaching the two-furlong pole that the daughter of Zoustar demonstrated her blistering turn of foot as she quickly pulled alongside those in the front rank.

As she entered the final furlong, there was only Meditate to beat and Aidan O’Brien’s Royal Ascot winner ultimately had no answer to both Lezoo’s acceleration and will to win, with three-quarters of a length separating the pair at the line.

It was the filly’s fourth win from five starts and she reversed form with Duchess of Cambridge winner Mawj, with Saeed bin Suroor’s youngster finishing a creditable third on this occasion.

Beckett said of the winner: “If you’d looked at her in July and look at her now she’s actually changed colour – she’s gone a bit darker. That’s probably because she went slightly off as she had four quick runs up to the Princess Margaret. It just caught up with her so we had to pull up.

“I wasn’t sure she was back on her game, I wasn’t convinced, but she just did one easy piece of work last week to build up which went well. She’s obviously just very good.

“She’d be the best two-year-old filly that I’ve had – we’ve had nothing as good as this at this stage.

“She doesn’t show up at home really to the extent she caught me out first time, I told her owners she’d win a novice and that would be it.

“William got her in a lovely place on the wing, she’s so professional she didn’t mind that, and three out I thought we were in business.”

“Unfortunately I don’t see her staying a mile – I’ve never felt that she would. I think it’s very unlikely, but the filly who finished fifth (Juliet Sierra) will,” Beckett added.

“If Lezoo runs again she’d go to Keeneland (Breeders’ Cup), but I’d have to think about that and see if it is really the best thing for her. I’ll work that out.

“She’s unlucky not to be unbeaten this season. How she didn’t get the race in the Duchess of Cambridge is a mystery.”