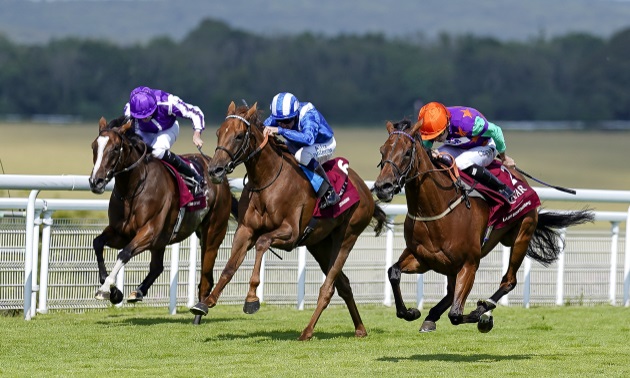 Lady Bowthorpe conclusively proved her stamina as she ran out a hugely popular winner of the Qatar Nassau Stakes at Goodwood.

Lady Bowthorpe's storming finish provided jockey Kieran Shoemark with a first Group One success, while it was a first at the highest level for trainer William Jarvis since Grand Lodge won the St James’s Palace Stakes in 1994.

Owned by music agent Emma Banks – who said pre-race she felt like she was headlining Glastonbury – the five-year-old hit the front just over a furlong out and powered away from there.

For a mare having her first run over 10 furlongs Shoemark was in no doubt about the 100-30 winner’s ability to see out the trip – and rather than play his hand late he kept things simple and the result was never in doubt.

Viewed as an unlucky loser in the Falmouth Stakes last time out – the form of which was franked in the Sussex Stakes by Alcohol Free and Snow Lantern – Lady Bowthorpe was in third before careering away from Zeyaadah and Joan Of Arc.

Zeyaadah was a length and a half behind at the line, with Joan Of Arc another half-length back. Breeders’ Cup winner Audarya briefly threatened, but her challenge proved short lived as she faded into fifth.

Newmarket-based Jarvis said: “It’s fantastic, we’ve dreamt about this for a long time, we knew she was special.

“I’m so chuffed for the team at home more than anything else, they’ve worked incredibly hard, we only have a staff of seven or eight.

“They all just work so hard for Lady Bowthorpe, it’s all due to them.

“I was confident she’d stay, I was a little bit worried about Roger’s (Varian) filly (Zeyaadah), she wasn’t stopping, but I knew we’ve got that great turn of foot – that’s her real strength.

“She’s relaxed, she’s settling so much better now, she’s a superstar. She’s not had the luck, she’s had to come back and she has.

“She’s a very, very special mare to train and she’s owned by a delightful owner, she gives me free rein though of course we discuss things – she’s superb.”

He added of Shoemark, who was handed a six-month riding ban in November 2018 and has spoken frankly since about the addiction problems that led to his suspension: “I’m absolutely delighted for Keiran, he’s a delightful young man, he’s got impeccable manners, he went to a bad place but he’s come out the other end.