Ladbrokes Trophy: What the trainers say 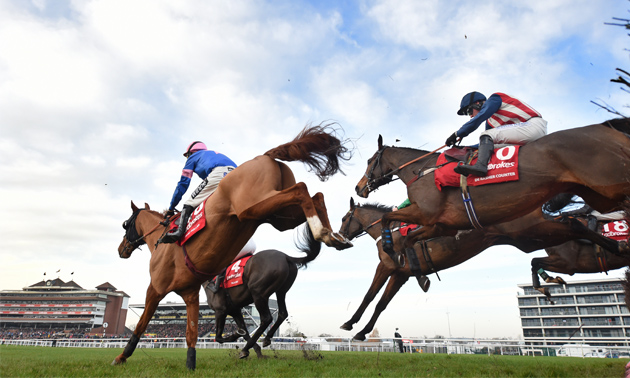 Kim Bailey is confident his talented “playboy” Vinndication is ready for the assignment that could prove him top class in the Ladbrokes Trophy Chase.

Bailey agrees that Saturday’s big handicap will signpost whether Vinndication is a Cheltenham Gold Cup contender or not, as he prepares him and stablemate Two For Gold to do battle.

The Newbury showpiece is a conspicuous absentee from the list of high-profile successes on the veteran trainer’s outstanding CV, but there were mixed reviews for Vinndication’s recent schooling session at Newbury.

“He’s done that before (jumped right) – he was very, very fresh, and when he’s fresh he does that,” said the Andoversford trainer.

“But for my own peace of mind, and possibly a few other people’s, he’s wearing a pair of cheekpieces tomorrow – which will help him concentrate a bit easier.

“He needs to concentrate. He’s a bit of a playboy, so what I saw the other day doesn’t worry me one iota.

“He’s schooled three or four times (since), and he’s been absolutely fine.”

Vinndication will be putting his Cheltenham credentials on the line, and Bailey added: “That’s one of the reasons we’re running him really (to find out if he’s Gold Cup class).

“He’s the right age for it, he has a fair amount of experience now. Yes, it’s a big ask because of the weight – but he’s absolutely right to be having his chance.”

Two For Gold will be carrying almost a stone less, but Bailey warns he has stamina to prove.

He said: “I am slightly concerned about the trip, and one of the reasons we’re going to Newbury is because of the (good) ground. I thought if the ground went soft there, I’d definitely have gone north (instead).

“He’s won twice over three miles, but I think it’s the limit of his stamina. But good ground could help him get further, so I’m hoping he will jump the second last and keep going, rather than stopping.”

David Bridgwater’s The Conditional beat Vinndication at Cheltenham in the Ultima and the former jockey is hopeful of adding another famous race to his record.

The Conditional has excellent handicap form and survives a late scare to strike in the Ultima under @brendanp1995.

“He did a bit of work on Wednesday and he flew past me, I’ve not seen him work as well as that before,” said Bridgwater.

“He’s 9lb higher than when he was second last year in this, but I’d like to think he’s improved as much as that. When he won at Cheltenham, he almost fell two out.

“Ironically, if he’d winged that, he’d have been in front too soon. He’s not ungenuine, but you wouldn’t want him in front that long so he may have got caught, who knows?

“I’m not too worried about quick ground, he goes on all sorts, and while I’d love him to win tomorrow, I think the ideal race for him is the National.”

Ben Pauling is hoping he has picked the right renewal of this famous race for Kildisart, having considered it as a target 12 months ago.

The eight-year-old returned with a fine third in a Grade Two hurdle at Wetherby last month, and his trainer senses the time is right.

“It was very much a prep run, back over hurdles, just to sharpen him up,” said Pauling.

“But he ran beautifully, travelled, jumped and didn’t really come off the bridle till after the second-last.

“It was everything we wanted to see, and we hope it’s put us spot on.

“It’s been the plan ever since the back-end of last season, and it really couldn’t have gone any better. We hope he’s in as good a place as he could possibly be to go and do the job on Saturday.

“We were toying with the idea last season, but we thought we wouldn’t necessarily go for such a competitive handicap on his first run out of novice company.

“I think this season he’s on the improve, and I’ve always thought he’s a horse could that get into the bottom of some level-weights markets and cut his teeth in that standard at some point.

“The ground is absolutely ideal. We couldn’t ask for better conditions, and I don’t think I could have him in better form.”

Tom George hopes the test of stamina will suit Black Op, second to Samcro at the Festival a couple of years ago.

“This has been our plan all along,” said the Cotswolds trainer.

“He would have needed his run at Carlisle (behind Imperial Aura) badly that day. I was pleased the way he ran there – I’m not sure the track suited him, but it was a good comeback run.

“The three and a quarter miles is a bit of a test, but he’s a high-class horse. He has a high cruising speed.

“In the Grade One (Kauto Star Novices’ Chase) at Kempton on Boxing Day – I know it’s a different type of track – but all he was doing was staying on at the end.”

Aye Right is a major contender from the Scottish borders, and his jockey Callum Bewley is optimistic as he prepares for his first ever Newbury ride.

“It’s a race I’ve always watched and wanted to ride in,” he said.

“You never ever think, growing up, that it’s going to be something that you get the chance to do. To be going down with a horse that’s got a live chance, all being well, it’s very exciting.”

Aye Right, who put himself in the frame when third – five lengths behind Vinndication – in last month’s Charlie Hall Chase at Wetherby, should also have his trainer on hand – after all.

Harriet Graham feared she would not be able to travel south to be with her first runner at the track, after suffering a cracked pelvis in what she describes as a “very stupid accident” when she was run over by her own lorry trying to help a fellow motorist.

However, she said this week: “I’m fine, I’m getting a lot better. I’m much more mobile and I’m going to be coming down to Newbury on crutches.

Among the remainder, Paul Nicholls has two chances – with Secret Investor and Danny Whizzbang – and Colin Tizzard’s Copperhead is another likely player if he can recover from his poor Wetherby return behind Kildisart.