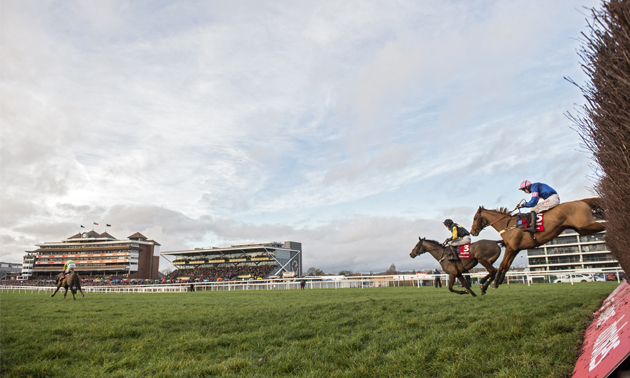 Get the Timeform verdict for each contender for the 2020 Ladbrokes Trophy at Newbury in our runner-by-runner guide.

Very smart on his day, winning the Charlie Hall and 3m handicap at Ascot (both heavy) last season. Does need to shrug off a poor reappearance run in this year's Charlie Hall, though.

Most likeable and progressive chaser who took it up another notch when 2 lengths second to Cyrname (Aye Right 5 lengths back in third) in the Charlie Hall on reappearance. Cheekpieces added. Considered.

Returned from wind surgery with an improved performance to see off Potterman by 7 lengths in a 3m Chepstow handicap in October. Form boosted since so a 6 lb rise is not excessive. High on the shortlist.

SECRET INVESTOR puts in a brilliant round of jumping under @CobdenHarry to run out an impressive winner of the Native River Handicap Chase at @Chepstow_Racing!

Won the Ultima at the 2019 Cheltenham Festival. Even better form when fourth of 24 in this on last year's reappearance and probably worth ignoring a lesser run over hurdles on his only subsequent outing.

Nicky Henderson is off the mark - Beware The Bear lands the Ultima! #TheFestival #CheltenhamFestival pic.twitter.com/b6fLDKF7Mx

Right back to his best when narrowly denied by The Conditional in the Ultima at Cheltenham Festival in March. Solid reappearance run over hurdles at Wetherby and that should put him spot on for this.

Grade 2 novice chase winner last term but well beaten when falling heavily in the RSA on final start. Also dropped away tamely on hurdle return last month but his yard does have a good recent record in this.

Big performance! Copperhead makes a successful step up from handicap company to rout his opposition under @JJONeillJnr for @colintizzard to provide him with back-to-back wins in the Sodexo Reynoldstown Novices' Chase at @Ascot 👏 pic.twitter.com/AYmnErJOnB

Added to his fine Ascot record when taking a Grade 3 handicap on reappearance but he's harder to predict elsewhere, underlined by his 3 performances in this, pulling up twice but also third in 2017.

A Regal Encore is exactly what this one deserves! 👏👏

An impressive win under Richie McLernon to sweep the Sodexo Gold Cup! pic.twitter.com/8tZZPlgsp5

Has quickly developed into very smart chaser, running a belter when 7 lengths third to Cyrname (Vinndication second) in the Charlie Hall at Wetherby. Unexposed granted this sort of stamina test. Player.

Cyrname puts in a classy performance to take the Charlie Hall Chase at @WetherbyRaces, scoring in great fashion for @PFNicholls and @CobdenHarry!pic.twitter.com/rN3nJPvG43

Won a Grade 3 handicap at Kempton last winter. Ought to be sharper for his reappearance run behind Regal Encore at Ascot last month but he was only sixth off an identical mark last year. Blinkers added.

Smart novice chaser last term and reappeared with a fine fourth to Imperial Aura in 2½m Carlisle listed 27 days ago. 3m has always looked to be the limit of his stamina, though, so the extra 2f is a worry.

Wow - drama! Champ remains unbeaten over fences with victory in the Ladbrokes 'Where The Nation Plays' Novices' Chase for Barry Geraghy and Nicky Henderson 😳👏 pic.twitter.com/SAVCQenkoY

Smart novice last season and stepped up again when second in a competitive 19f Wetherby handicap on reappearance. Open to further progress now going back up in trip. One of 2 strong contenders for his yard.

Two For Gold remains unbeaten over fences after landing this Grade 2 contest in exciting style for @kimbaileyracing 👏👏 pic.twitter.com/vXR3ZhGEqw

Enjoyed excellent first season with this yard, second in this and concluding with a neck defeat of Kildisart (Vinndication fourth) in the Ultima at Cheltenham, doing well after a mistake 2 out. Respected.

The Conditional has excellent handicap form and survives a late scare to strike in the Ultima under @brendanp1995.

Dual Grade 1 novice chase winner in 2018/19 but without a win since. Behind Vinndication and Aye Right in the Charlie Hall last time and it's likely that her wait for another success will go on a bit longer.

Looked a very smart chaser in the making when taking a Grade 2 novice at this meeting last year but things haven't gone to plan since, including when well beaten in the Badger Beers on return (reportedly bled).

Very useful staying chaser on his day but hard to be sure what sort of form he turns up here in having unseated at the first on his Kelso reappearance. Visored first time.

The Hollow Ginge makes the most of an incident packed Somerby Chase to land the spoils for Sam and Nigel Twiston-Davies pic.twitter.com/nVF36UgBwt

Improved again to win a competitive 3m handicap at Market Rasen in August and just as good when runner-up at Chepstow (to Secret Investor) and Wincanton (beaten short head in Badger Beers) since.

Useful chaser who fared about as well as could be expected when fifth behind Imperial Aura at Carlisle on his return. Top yard always respected but he'll need an improved performance to overcome this mark.

Third in the 2019 Scottish National. Didn't hit the same heights last season but returned with an encouraging third to Frodon over 25f at Cheltenham. Could go well with cheekpieces on for the first time.

It's Takingrisks that shows he's all stamina and wins the Coral Scottish Grand National at 25/1 for the Nicky Richards Team in the hands of Sean Quinlan 🙌 pic.twitter.com/SNUapOQ8OZ

A cracking renewal. AYE RIGHT leaves the impression he may have an even bigger performance in him now racing beyond 3m for the first time over fences and can become the first Scottish-trained winner since 1979.

Secret Investor rates a big threat after his impressive defeat of Potterman at Chepstow. Kim Bailey's pair Vinndication and Two For Gold are two of many others who could go well.