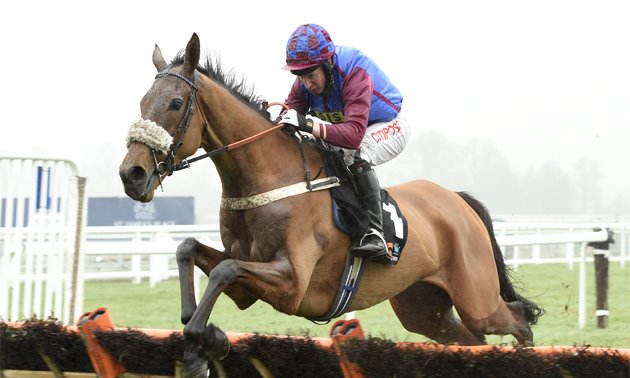 The mare went into the contest with a perfect record over fences to date, and maintained her unbeaten record at the expense of Paul Nicholls' huge chaser Topofthegame.

Richard Johnson was happy to take a lead for two-thirds of the contest, as Red Indian and Bags Groove set a steady pace, until the latter disappointingly dropped away on the second circuit.

La Bague Au Roi jumped herself to the front a long way from home, gaining lengths at her fences and putting the others under pressure, including the favourite Santini, who was caught flat-footed turning in.

Topofthegame loomed up and looked set for victory as Henry Cobden kicked him into a lead approaching the second-last, but he met the fence wrong.

That gave La Bague Au Roi (8-1) the advantage again and she would not be denied, flying the last and keeping on for a length-and-a-half victory.

What a horse she is!

LA BAGUE AU ROI remains unbeaten over fences with a brilliant victory in the (Grade 1) Kauto Star Novices' Chase at @kemptonparkrace for Warren Greatrex and @dickyjohnson77!

Greatrex said: "I think now, she is physically there. She is tall and is a big mare and it is probably only now she has her strength. She jumps, and that is the - she is so quick from one fence to another.

"Dicky (Johnson) said most of the way round he feels like he is in second gear, as she is just hacking along. I was looking behind and trying not to get too excited. I kept seeing them go one by one.

"I thought turning in second would do and I would take that, but she has gone and done it. It's an amazing day."

He went on: "She definitely stays the trip. It's brilliant. We want to compete at the top level and we've done it again.

"We can pretty much aim her anywhere. We've always said we are not totally sure Cheltenham is her track.

"She is better on a flat track. We can go anywhere. We may look at the Leopardstown meeting in Ireland (in February). Why not, let's go nick some of their euros!

"It's the best Christmas ever. "

Nicholls said of the runner-up: "He looked like he came there and won it and he half-idled a fraction, as he was a bit novicey over the last two and then he stayed on strong.

"He is still a big baby. He jumped brilliantly and travelled strongly. I'm thrilled with him, as he is a smart horse. A stiffer track will suit him better.

"There are no excuses, he ran well. He had plenty of pace there. He will go to the Reynoldstown, then the RSA. We don't want to over-run him this year."

Nicky Henderson said of Santini: "I thought he ran a great race, he was just done for pace on the bend, but was staying on again."