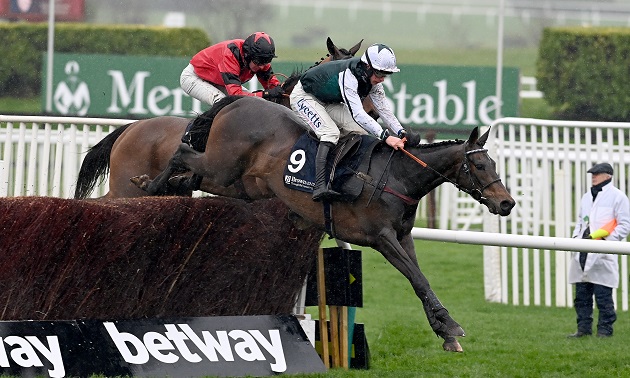 L’Homme Presse put himself firmly in the Cheltenham Gold Cup reckoning as he made light work of Newcastle’s Betfair Exchange Rehearsal Handicap Chase on his return to action.

The Venetia Williams-trained L'Homme Presse won five races on the bounce last term, culminating in a Grade One success in the Brown Advisory Novices’ Chase at Cheltenham before meeting with defeat on his final start at Aintree.

Making his first start of the campaign in the hands of Charlie Deutsch, he travelled prominently throughout the near three-mile contest.

Having started as the 6-4 favourite, the gelding jumped fluently bar one error and was comfortably ahead of Mark Walford’s Into Overdrive on the line, prevailing by a cosy length. Happygolucky was a further three lengths back in third.

L’Homme Presse was rerouted from a planned run at Ascot last week on account of unsuitable ground and owner Andy Edwards was delighted with his opening effort under top weight of 12st, with Betfair cutting the winner to 7-1 from 10s for the Festival in March.

He said: “I was really relaxed all week, not worried at all – not about winning, but just relaxed about my horse.

“He’s just class. First run of the season, to do that. Venetia said he was ready to race but would come on a lot for that.

“The scare, that woke him up where he nearly went, that was probably the best thing to happen because he was flying away thinking ‘oh this is easy’. Once that was done, he woke up and was very clever at his fences after that.

“He’s only jumped three fences since Aintree, he’s only schooled once, because of the ground and travelling to Ascot. That was the only thing I concerned about, he might be a bit ring-rusty around his fences.

“We said if they go off silly to tuck him in behind and just follow but he just travelled so well and all of a sudden he was in front again. It’s wonderful and we’re very lucky.”

L’Homme Presse was clipped to 7-1 from 10s for the Gold Cup in March, but Edwards is unsure of his Festival route.

He added: “I don’t know (where he goes next) but it would have to rain a lot to go to the King George (at Kempton on Boxing Day).

“Venetia said ‘let’s do it in two halves’, do up to the new year in one half and then we worry about the second half later.”

Williams was at Newbury and when asked about L’Homme Presse’s next race, she said: “I don’t know and really don’t want to be second guessing where he goes next. Even this race was up in the air until a few minutes beforehand.”

The handler was more than satisfied with her charge’s performance though.

She said: “Apart from the nervous moment where he nearly sat down, which was a scary moment at one point, obviously I’m delighted, thrilled. He had to get the job done and he did.

“He is a special horse for us. He has done his work like you’d want him to. But what horses do on a five-furlong interval training gallop isn’t always the best guide to what is going to happen over three miles on a racecourse.

“He has done everything that we wanted and it was nice we eventually found somewhere for him where the ground was OK. Once you get to this level, hardly anything is ideal, because you have such few opportunities.

“It is nice to do the job, now we can bring him back and see if he comes out all right and think about the next one.”