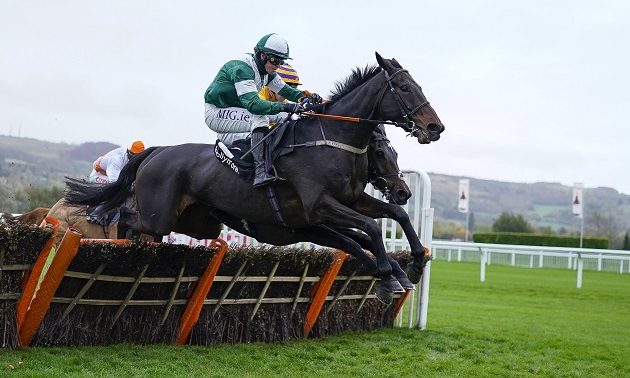 A return to Cheltenham for the Albert Bartlett remains the ultimate aim for Blazing Khal after his Grade Two success at the track during the November meeting.

The gelding was a bumper winner last year when taking a competitive contest on heavy ground at Limerick, with his graduation into the hurdling ranks a success when he won a Galway maiden in October.

A steep step up in class then followed in Cheltenham’s Ballymore Novices’ Hurdle on November 12, an early-season trial for the Grade One Cheltenham Festival event with which it shares a name.

Blazing Khal proved himself perfectly able to hold his own among higher-calibre company, however, and was a convincing two-and-a-half-length winner at 9-2 under jockey Donal McInerney.

The victory has further bolstered trainer Charles Byrnes’ plans to head to Prestbury Park in March for the Albert Bartlett Novices’ Hurdle over three miles.

“It’s a big plus now we know he handles the track and has some form there,” he said.

“He’s come home in good form, I haven’t really made any plans for him yet, but the goal is the Albert Bartlett back at Cheltenham in March.

“I think there’s a Grade One at Naas just after the New Year and there’s the Dublin Racing Festival, but at the moment I haven’t made any plans for him.”

The five-year-old had seemed to show a preference for softer ground in his previous runs, but the Cheltenham performance came on good going and has left Byrnes to wonder whether he may not be as ground dependent as originally thought.

“The way he handled the ground the last time, you’d be wondering,” he said of the notion that Blazing Khal might not enjoy firmer conditions.

“I’d say it looks like ground wouldn’t be an issue to him, or so you’d hope.”