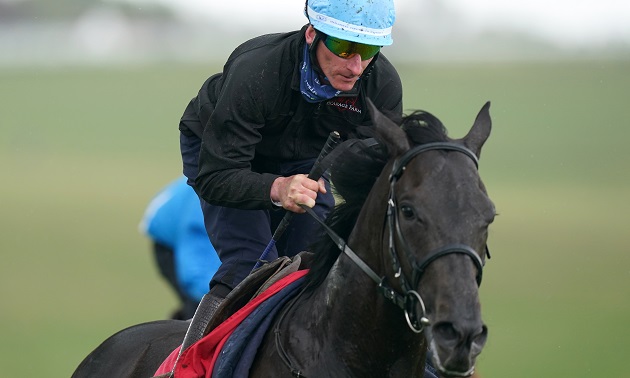 John Leeper will aim to redeem his reputation in the Davies Insurance Services Gala Stakes at Sandown next Friday.

The Ed Dunlop-trained John Leeper caught the imagination of the racing public in the lead up to the Derby at Epsom given he was by Frankel, out of Dunlop’s great racemare Snow Fairy and named after the handler’s father.

However, he was very keen in the hands of Frankie Dettori and dropped away in the straight to be beaten 20 lengths. In a quirk of fate, Dettori was a late replacement for Adam Kirby, who went on to win the Classic on Charlie Appleby’s Adayar.

“All being well and everything being equal, we’re probably going to go to Sandown next Friday in a Listed race over a mile and a quarter and we’ll see how we get on there,” said Dunlop.

“There is a race in France next weekend for three-year-olds over a mile and a quarter if I’m not happy with Sandown, but at the moment we’re heading to Sandown.

“We’d like to sort of drop down before going back up again. Sandown is a stiff 10 furlongs which will suit.

“He was a bit keen at Epsom and Frankie suggested we drop him back in trip, this seems an ideal race. We’ve always thought on pedigree and looks he should stay a mile and a half, but we mustn’t forget he’s only run four times in his life.

“He did a lot in a month, going from a Newcastle novice to the Derby with a Listed race in between. He fell into everyone’s dream given his pedigree and being named after my father and people latched on.

“That dream has gone now, we’ve moved on and he’s a horse we’re in no rush with. He should be better as an older horse and we retain utmost faith in him.

“It didn’t happen at Epsom, but the one thing was he didn’t have a hard race – when Frankie knew he wasn’t going to be involved he just let him coast home.”