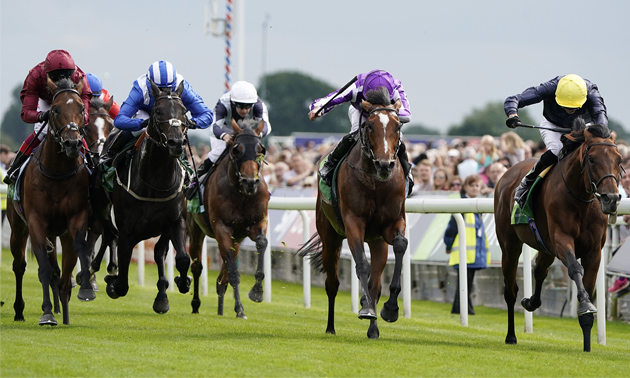 Japan stamped his class on the tote+ Pays You More At tote.co.uk Ormonde Stakes at Chester.

A narrowly-beaten third in the 2019 Derby at Epsom, Japan went on to win the King Edward VII Stakes at Royal Ascot, the Grand Prix de Paris at Longchamp and the Juddmonte International at York, before finishing fifth on his final start of the year in the Arc.

Japan might have failed to add to his tally last season, but was still placed in the Eclipse and the King George, so it was no surprise to see Aidan O’Brien’s charge go off as the clear favourite as he had his sights lowered to Group Three company but up in trip for his seasonal reappearance.

Always travelling strongly in the hands of Ryan Moore, the 13-8 chance tracked Alan King’s Long Distance Cup winner Trueshan – who was giving 5lb to the winner – into the straight, before displaying a superior change of gear to run him down and ultimately prevail by three-quarters of a length.

🇯🇵 Japan makes his class count in the Group 3 Ormonde Stakes at @ChesterRaces!

Moore said: “”He’s a beautiful horse who we’ve always held in high regard and he’s won a Juddmonte. Hopefully that will give him a bit of confidence, he didn’t really enjoy that dead ground. He’s a lovely looking horse with a great mind and hopefully he can go on from here.

“The Coronation Cup is an option, he ran well in the Derby there and this should set him up for the bigger races later in the year. I’d expect him to come on from this as well. He’s got some class – I’ve always had a very high opinion of this horse.”

The rider added: “The ground is just sticky enough for him and the trip probably stretches him, but he has loads of class and it’s good that he’s come back with a win.”

King was understandably delighted with his Champions Day hero Trueshan, who will now head for the Ascot Gold Cup.

The Barbury Castle trainer said: “I’m absolutely thrilled with him and I’ve just spoken to Hollie and she feels the same.

“It’s great to get him out and get him started and I think he’s run a terrific race. I’m very pleased.

“He’s a wee bit slow out (of the stalls) and you just have to roust him a little bit, but Hollie got him into a lovely position and all in all it was a terrific run.

“That (Gold Cup) will be his next stop if the ground is right. We’ll just have to see what the weather does in June.”

Earlier on the card, El Drama emerged as a potential Classic contender with a clear-cut victory in the tote+ Biggest Dividends At tote.co.uk Dee Stakes at Chester.

A field of seven three-year-olds went to post for the recognised Derby trial, with El Drama sixth in the betting at 12-1 on what was just his second start on turf.

Since that successful debut on soft ground at Doncaster, the Lope De Vega colt had finished third in successive races on the all-weather, but took his game to new heights on the Roodee.

After tracking the pacesetting favourite Yibir for much of the extended 10-furlong journey, El Drama was pushed into the lead rounding the home turn by Andrea Atzeni and he stayed on well to score by a length.

Maximal made late gains to fill the runner-up spot, with Earlswood third and Yibir fading into fourth place.

👏 Put up at 12/1 by @MattBrocklebank, El Drama relishes the step up in trip as he lands the Dee Stakes at @ChesterRaces for @varianstable and @Atzenijockey!pic.twitter.com/0UvRudQLW9

Trainer Roger Varian said: “I’m very pleased with that today. He’s always shown masses at home and we were trying to funnel him into being a 2000 Guineas contender.

“Because he only ran once at two there were limited options trying to get experience into him. He ran over seven furlongs at Lingfield and a mile at Kempton, which wouldn’t be ideal spots for him. He ran with credit, but always looked a better horse on turf.

“He didn’t run well enough to take in a Guineas, but this was a nice alternative plan. We thought he’d stay 10 furlongs well and that he’d be better back on grass.

“I’m delighted that he’s done that today as we always thought him capable of something like that.

“It’s good for him to redeem his reputation.”

Paddy Power cut El Drama to 16-1 from 66-1 in what is an increasingly murky Derby market, with Bolshoi Ballet and Mohaafeth joint-favourites at 5-1 and High Definition pushed out to 7-1 after being ruled out of his intended prep run at Lingfield this weekend.

However, Varian raised the French Derby as a viable alternative to next month’s premier Classic at Epsom for his colt.

“Having spoken to Sheikh Obaid, all options are open and he’d like him to be considered for the Prix du Jockey Club,” the trainer added.

“He’s a very strong work horse, but I thought if Andrea switched him off today, the fact you are always on the turn helps them relax.