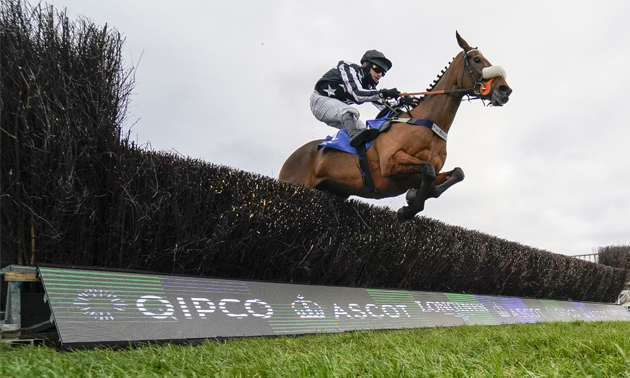 Imperial Aura advertised his claims for further Cheltenham Festival glory with an impressive display in the Chanelle Pharma 1965 Chase at Ascot.

Stepping up to Grade Two company from Listed level, Kim Bailey’s charge – a winner at the showpiece meeting in March last year – put in an almost foot-perfect round of jumping to cruise home by five lengths at the 13-8 favourite.

Bryony Frost was eager to set the gallop aboard Black Corton in the two-mile-five-furlong contest – but David Bass had Imperial Aura on their heels and had just edged in front before Frost was unseated with eight fences still to jump.

While Real Steel briefly hit the front at one stage, Imperial Aura always looked to be in control and barring a slightly haphazard leap at the penultimate obstacle, Bailey’s runner never looked likely to be beaten.

Itchy Feet looked under pressure with three to jump, but stayed on to snatch second, with Real Steel a further two and a half lengths back in third.

IMPERIAL AURA puts in some stunning jumps under David Bass and continues his rise through the ranks with an impressive victory in the Grade 2 Chanelle Pharma 1965 Chase at Ascot for @kimbaileyracing 👏pic.twitter.com/mgk2WP0TmT

Imperial Aura is now as low as 7-1 with Paddy Power for the Ryanair Chase at the Festival in March, with Coral going 8-1.

Bailey said: “I was really pleased with the horse and what a fantastic ride. He took the race to them, and he had to. We knew he would stay and he is just a very progressive horse. He had improved at home, we knew that.

“You have to have a go and today was the right race. I’m really pleased he is going forwards and the Ryanair is now where we head, I suppose.

“His jumping as always (is what really pleased me). Those downhill fences were electric to watch. He fired them in and by taking them on it made it so much better from his point of view, as you look at it and at one stage Harry Cobden was sitting hard-held beside him (on Real Steel).

He went on: “I don’t know where we go (next). He will probably have one run between now and Cheltenham. I thought we would get today done with and from the result of today we knew where we were going. He was either a Ryanair horse or we were going for something completely different.

“I’m not going to go that far that quickly (and try turn him into a Gold Cup horse), but he will certainly get further. He ran over three miles last season and Pym beat him, but the two were racing for a long time and he showed his inexperience.

“This is the most progressive horse I’ve had for a long time – he has never stopped improving and that’s the important thing.

“It is lovely to have horses good enough to be here, but without owners we are not here and it is important they get the credit they deserve.”