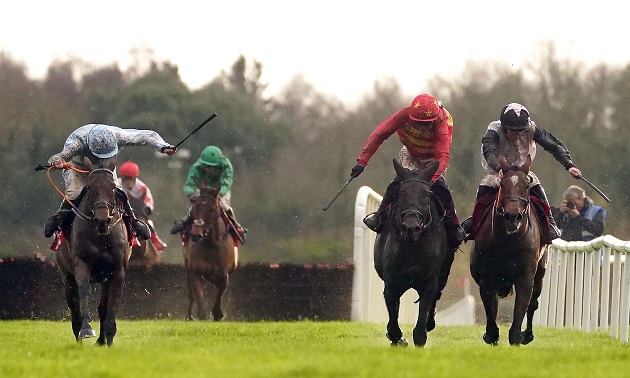 Teahupoo caused a shock in the Bar One Racing Hatton’s Grace Hurdle as Honeysuckle’s unbeaten run came to an end at Fairyhouse.

Henry De Bromhead’s mare has begun her season by winning this contest in each of the last three years and went to post looking to create history by becoming the first four-time winner of the Grade One hurdle.

Starting what is likely to be her last season in training, everything seemed to be going to plan for the eight-year-old and her ever-present accomplice Rachael Blackmore when they cruised to the lead two from home.

But Willie Mullins’ Klassical Dream and Teahupoo were in striking distance at the final flight, and it was Gordon Elliott’s 20-1 shot who pulled out most in the closing stages to prevail on the line.

Elliott and jockey Jack Kennedy were completing a Grade One double after Mighty Potter’s success in the Drinmore Novice Chase earlier on the card.

Teahupoo had been comprehensively beaten by Honeysuckle at both Cheltenham and Punchestown last term, but Elliott felt conditions may have been against his charge on those occasions, with Fairyhouse’s soft ground a much better fit.

He said: “He was very good last year on soft ground and we ran him on good ground a couple of times which was probably a mistake but we are still learning about the horse.

“Jack gave him a wonderful ride. He let it all happen in front of him and there is only one winning post.

“It’s been a brilliant day with two Grade Ones and we were only beaten a head for three.”

He said: “That was unexpected. I came here wanting Honey to keep winning and if we finished second, that was brilliant.

“We have such a close association with Kenny (Alexander, Honeysuckle’s owner) and Henry.

“I’m genuinely in shock. I thought the mare was unbeatable – it will hit me tonight.

“There is a tinge of sadness that the run is ended. I just hope she comes back and beats Constitution Hill (at Cheltenham)!”

Honeysuckle is now an 8-1 shot with Coral to rack up a third Champion Hurdle win at Cheltenham in March, with Nicky Henderson’s Constitution Hill cut to 2-7 from 4-7 for the Festival highlight.

Betfair offer 5-1 about Honeysuckle’s chance in the Mares’ Hurdle, a race she won in 2020.

“It’s a horse race and unfortunately she got beaten and that’s it,” said De Bromhead.

“We’ve had some run with her for so long and there we go. They’re going to get beaten one day. She’s been incredible and fair play to the winner. It was always going to happen someday, that’s unfortunately the reality of it, but we’ve had some go and it’s not over either.

“(Rachael didn’t say) a whole lot – she’s very disappointed obviously. Everyone is disappointed, as you would expect.”

Speaking to Racing TV, owner Kenny Alexander added: “It seemed to be business as usual, but they all get beat in the end unfortunately.

“She ran her heart out, she seemed to be going as good as ever and then she just emptied going over the last and was beaten.

“It doesn’t take anything away from what she has achieved, and she has taken me to races and competing in races that I could never have dreamed of doing. It just wasn’t to be today, and life goes on.

“I said to Henry just after she got chinned ‘I said in the paper you were a genius and you are still a genius, just not as much as a genius as earlier this week’. It’s disappointing, but it’s not the end of the world.

“When the race finished there was like a hush. I think everyone wanted to see her win and it was a bit strange really. She got a great reception and she’s a superstar who has been doing it for years and years. Who knows, maybe time has caught up.”

The question now is do connections call time on the career of their 12-time Grade One winner.

“He’s been unbelievable with this horse and he’s an unbelievable bloke and Rachael has been fantastic with her. Just today wasn’t to be.

“I’ll go up and have a few drinks and sleep on it. It’s up to Henry. She’s finished third in a Hatton’s Grace, but I do want to get her out safe and sound because she deserves that.

“But it is up to Henry. If Henry says in 10 minutes time that’s it, then that’s it, if he says we go again, we go again – he’s in charge. It’s really sad, all these people turned up and I really wanted her to win for Henry.”