Hollymount joins Elliott after being sold for £300,000 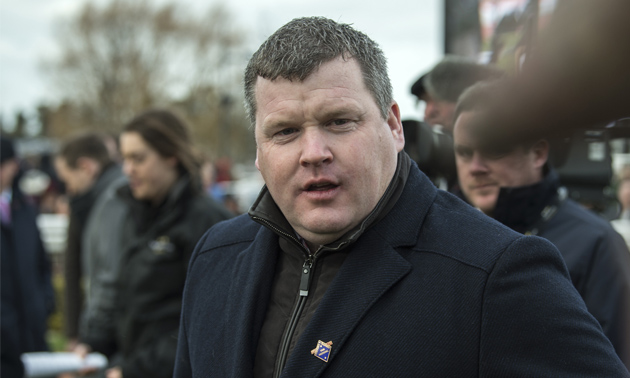 Exciting bumper mare Hollymount is set to join Gordon Elliott after being sold for £300,000 on Tuesday.

The Goffs January Sale usually takes place at Doncaster, but both horses in training and National Hunt breeding stock were this year sold entirely online due to the restrictions in place because of the coronavirus pandemic.

Hollymount is a daughter of Jet Away out of broodmare Zaffarella, who has produced a trio of high-class performers in Windsor Avenue, Ravenhill Road and Malone Road. The later joined Elliott three years ago for £325,000 and has since won three of his four starts.

Zaffarella’s latest potential star made an impressive start to her racing career for trainer Stuart Crawford in a bumper at Carlisle last month – winning by eight lengths in the hands of champion jockey Brian Hughes.

HOLLYMOUNT who won by 8 lengths on her debut at @CarlisleRaces in December is sold to Noel and Valerie Moran of Bective Stud for £300,000 as part of the online @GoffsUK January HIT & Breeding Stock Sale. pic.twitter.com/X6O8lwIyuP

The online bidding for Hollymount started at £180,000, before she was eventually being knocked down to Noel and Valerie Moran’s Bective Stud for £300,000.

The Morans are becoming an increasingly powerful force in Irish National Hunt racing, with the likes of Triumph Hurdle favourite Zanahiyr and £400,000 purchase Grand Roi among their big-race winners on the track this season.

Elliott’s bloodstock agent, Mouse O’Ryan, said: “Hollymount has been bought for Noel and Valerie Moran to go to Gordon.

“She looks very smart and was well recommended and we’ve been lucky with the family.

“Hopefully she’ll go on to big things on the track before going on to become a broodmare.

“Noel and Valerie obviously bought Apple’s Jade and have some other very nice mares on the track, including Queens Brook, Party Central and Riviere D’etel.

Asked whether Hollymount could take up her entry in a Grade Two bumper at the Dublin Racing Festival at Leopardstown on Sunday week, O’Ryan added: “We haven’t even got her in the yard yet, so we’ll have to wait and see.”

The undoubted star of the breeding stock on offer was Grade One-winning mare La Bague Au Roi, who won 14 races for trainer Warren Greatrex including the Kauto Star Novices’ Chase at Kempton and the Flogas Novice Chase at Leopardstown.

The recently-turned 10-year-old was sold for £170,000 to former Republic of Ireland international footballer Kevin Doyle and bloodstock consignor Peter Nolan.

Nolan said: “When you see what the mares have been making all year, I’m not saying she’s value but I don’t think she’s over-dear.

“We said we’d try to get her bought before deciding which stallion she’d go to.

“Kevin bought Augusta Kate a couple of years ago and has a couple of lower-grade mares. He wants to get a nice band of mares together.”