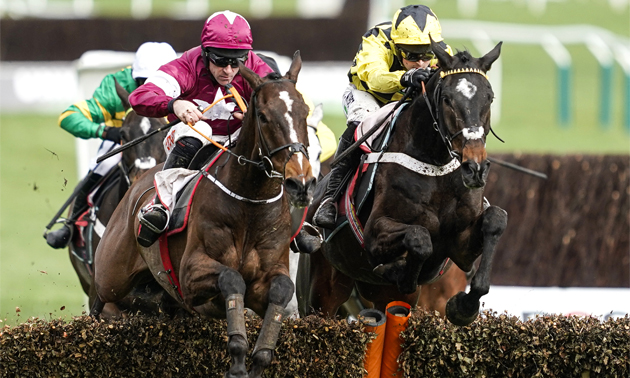 Nicky Henderson is considering treading the same path he did with Altior following his victory in the Supreme Novices' Hurdle - by sending this year's winner of the race, Shiskin, over fences next season.

It was a move which worked perfectly with Altior, who won the Cheltenham Festival opener in 2016 and then famously extended his unbeaten sequence over jumps by 14 further races - including the Arkle Challenge Trophy and two successive Queen Mother Champion Chases.

Although a final decision has yet to be made on Shishkin's next move, he is already as short as 4-1 for the 2021 Arkle - and Henderson admits he is "tempted" by a switch to fences.

Since falling on his debut over hurdles at Newbury in December, the talented six-year-old - who runs in the colours of Joe Donnelly, also owner of dual Gold Cup hero Al Boum Photo - has improved with each run, culminating in a head victory from Abacadabras at the Festival.

Thrilling finish to the opening race of the 2020 #CheltenhamFestival as SHISHKIN - friendless in the betting this morning - lands the Supreme Novices' Hurdle!

Henderson said: "Joe is a great man and he leaves it entirely to us to get on with it and make plans - because he says 'the horses are in your hands'.

"He is a very quiet man and just says 'do whatever you think is right'.

He said: "I'd probably be tempted to go chasing with him.

"He has won his bumper easily and two novices hurdles very well - and although he didn't win the Supreme like Altior, it was obvious why.

"I will have a talk to Nico (de Boinville), and we will probably give him a school over a fence in the autumn and look and see, because he's always got the other option of staying over hurdles."

Should Shishkin remain over hurdles, it would add further intrigue to the two-mile division - which for so much of this season looked weak, compared to previous years.

Henderson said: "With Epatante (the yard's Champion Hurdle winner this year) and possibly the other two mares Honeysuckle and Benie Des Dieux all in there - and don't forget if we get (dual champion) Buveur D'Air back with a bit of luck - then all of a sudden it is not the weak division everyone thought it was.

"Then you, of course, have (this year's top juvenile) Goshen - and if you throw Shishkin into the melting point, then wow!

"He has already won a point-to-point, so I would have thought there is every chance he goes chasing.

"But that is not because I would be frightened of the others over hurdles - (just) that is what he was born and bred to do."

Reflecting on Shishkin's victory in the Supreme, Henderson is of the opinion it was a mark of his talent that he overcame trouble in running after nearly being taken out at the second-last.

He added: "It was a great performance - and I've watched the replay about a dozen times, and he was so lucky he didn't get carted into the car park. It just shows you what a good horse he is to get back up from there.

"I've always said how much natural speed he has got, and if you have got a horse with that ability they can pick up and get back in position.

"He had to use a huge amount to get back in it, and I thought he was totally out of it. I'm not saying he is the next Sprinter (Sacre) or Altior - but I hope he could be, because he is very talented."

A switch to chasing is also likely - along with a step up to two and a half miles- for stablemate Chantry House, who was third behind Shishkin in the Supreme.

Henderson said: "He stayed on well, but we said before the race he probably wants two and a half.

"He ran a very good race, and I don't think we would have beaten Envoi Allen in the Ballymore. I think that would have been Henderson wishful thinking!"

"He will get two and a half, and I would say that would be over fences, but we've not had that discussion yet.

"He has gone back to Ireland now to Martinstown (owner JP McManus' stud)."