Henderson opting for tried and tested route with Champ 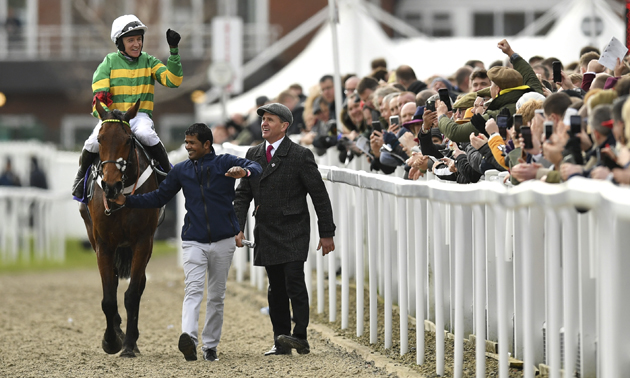 Champ could start off his journey towards the Magners Cheltenham Gold Cup in the Future Stars Intermediate Chase at Sandown in November.

Trainer Nicky Henderson has earmarked the Listed prize, which he claimed last year with Gold Cup runner-up Santini, as a possible first port of call for the JP McManus-owned eight-year-old.

After losing his unbeaten record over fences at Cheltenham on New Year's Day with a late fall in the Dipper Novices' Chase, Champ returned to winning ways to claim a remarkable victory in this year's RSA Insurance Novices' Chase at the Festival.

Henderson said: "I don't see why he can't be a Gold Cup horse next season. He is top class, there is no doubt about it.

"There is every chance we could use the intermediate chase at Sandown for Champ which we won this season with Santini.

"There are not a million races for these sort of horses. It would be a perfectly good place to start."

While not surprised Champ left his previous fall behind, Henderson was taken aback by the victory at Cheltenham, as he still had more than eight lengths to find on both Minella Indo and Allaho after the last.

He added: "It wasn't a surprise that he won, as we all knew that he could do that.

"He had done nothing wrong all season, he just had that one fall at Cheltenham. I wanted to run him again before the Festival, but I never had the opportunity to go anywhere.

"Where all that came from at the end, I don't know. It was an extraordinary performance from the horse and from Barry Geraghty."

For Champ to be a genuine contender in next year's Gold Cup, for which he is general 14-1 chance, Henderson believes there is one thing he needs to improve on.

He said: "We have got one area we need to improve on and that is we have got to brush up his jumping and we can do that.

"He is OK at doing it, but he has just got his own way of doing it. It just needs to be sharpened up."

Henderson is likely to have two major players in the Gold Cup next year with all roads leading back to a second shot at the race for this year's runner-up Santini.

He said: "He ran the race of his life. A bit softer ground could have worked well, but there was no excuses.

"That was only his sixth start over fences in his life and his third time around Cheltenham and he has not put a foot wrong.

"He is big, raw horse that has the potential to win the Gold Cup, which he will be aimed at again."

While Henderson has mapped out a potential early season plan for Champ, he remains undecided which route to take with Santini.

He said: "I don't really see Haydock (Betfair Chase) suiting him or Kempton (King George), but we will have to see as it is all a long way off.

"It is to premature to say where he will go, as plenty of things can happen between now and the autumn."

One thing Henderson believes could have assisted Santini in the Gold Cup was a stronger pace - something 2018 winner Native River would almost certainly have provided had he not missed the race through injury.

He said: "When Native River came out of the race I thought, 'good, that will slow it down' - but in hindsight it would have been a good thing for us.

"A good gallop would have set it up better for us, but it wasn't the case."

Henderson dismissed talk of retirement for Grade One winner Might Bite and instead hinted at a campaign over the cross country fences next season for the 11-year-old, after he finished seventh in the Glenfarclas Chase at the Festival.

He said: "There is most certainly no plan to retire Might Bite. He really enjoyed himself over the cross-country fences.

"The ground was violently against him, but that (cross country) is what he will be doing next season and it was a good experience for him."