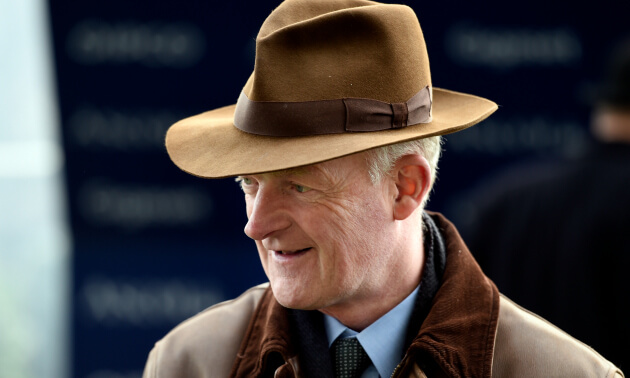 Sharpened by a run on the Flat on Monday’s card, the six-year-old mare was always travelling well for Paul Townend on her first outing over jumps since she was third at the Cheltenham Festival.

Ministerforsport and Recent Revelations made the early running in the €80,000 feature, with Great White Shark taking closer order on the final circuit.

There were several in with chances, but Great White Shark (5-1) was going best of all and asserted from the final flight to beat stable companion My Sister Sarah by two lengths.

A fifth win of the week for jockey @PTownend at @Galway_Races as Great White Shark, who was third at Ballybrit on Monday, captures the €80,000 @GuinnessIreland Handicap Hurdle for @WillieMullinsNH

“She obviously likes the place and won the big amateur race last year and was also third in this. She also ran well again here the other night,” said Mullins’ assistant David Casey.

“Paul said they didn’t go very quick, but she obviously likes it here and it’s a case of ‘horses to courses’ really.

“My Sister Sarah ran well also, she keeps galloping well and is a decent mare.”

Mullins and Townend were completing a double after striking with French import N’golo (11-8) in the James’s Gate Maiden Hurdle.

The jumps newcomer led two out and went on score by eight and a half lengths from Make Good after the 4-5 favourite Risk Factor fell at the last.

“It was his first run coming from France and he was generally good, but had a look at something (at the last with a circuit to race),” said Casey.

“He had been working well at home, he is a big, strong horse and should improve from that.

“He is grand at home, pops and jumps and he’d go on slower ground.”

Nibblers Charm routed the opposition with a wide-margin victory in the Guinness Galway Tribes Handicap Hurdle.

The seven-year-old, fit after two runs on the level, pulled well clear to take the near €30,000 first prize in tremendous fashion.

Filon D’Oudairies took the 15-strong field along until before the second-last flight where Nibblers Charm coasted into the lead in the hands of Simon Torrens.

The 7lb claimer kicked for home on Ray Hackett’s charge and Nibblers Charm (12-1) surged ahead to score by 12 lengths from Poseidon. Fan De Blues, the 7-4 favourite, was half a length in third.

“His run the last day sharpened him up; he can race on and off the bridle so we gave him a few spins on the Flat and it worked out grand,” said Hackett.

“The 7lbs was a huge help carrying 9st 9lbs and it is Simon’s first ride for me and I’m delighted for him and he gave him a great spin.

“We were hoping he’d get into the Grade B hurdle, but that’s my first Galway Festival winner and we won’t be greedy.

“We might look at taking him across to Cheltenham for the November meeting and he has plenty of size and scope to jump fences. I want to have a crack at a big pot before we go chasing.”

The Storyteller (100-30) bounced back in style to take the Arthur Guinness Chase.

A former Cheltenham Festival winner, he was pulled up in the Galway Plate on Wednesday but was right back to his best as he cruised home under Keith Donoghue.

Ian Almond, assistant to winning trainer Gordon Elliott, said: “The other day (Galway Plate) was obviously the plan, but it went a bit pear-shaped. Davy (Russell) did the right thing and looked after him as he’d never have got back into it after what he did at the first few fences.

“He did it easy there and it paid off. He is a great horse and everywhere he turns up he never lets you down.”

Mindsmadeup survived an error two out to land the €50,000 Guinness Galway Blazers Handicap Chase for Matthew Smith and Robbie Power.

Smith said of his 11-2 winner: “We were in two minds to run him this morning and two of the owners Shay Gillen and Tom McGrady decided to let him take his chance.

“This race was the plan last year, but unfortunately he was lame the day before the race so we had to pull him out and it was the target again.

“The intention was to hopefully win and get him up a few pounds and he’ll go for the Kerry National now.

“It was lovely to get and Robbie gave him some ride in fairness to him.”

There was a nasty-looking fall in the race, with Gavin Brouder taken for further assessment after his spill from Portmore Lough.

An update from medical officer Dr Ciara O’Carroll on the Irish Horseracing Regulatory Board Twitter feed read: “Gavin suffered a heavy fall in race 7 at @Galway_Races but was fully conscious leaving the racecourse and moving all limbs.

“He has been transferred to University Galway Hospital for further assessment.”