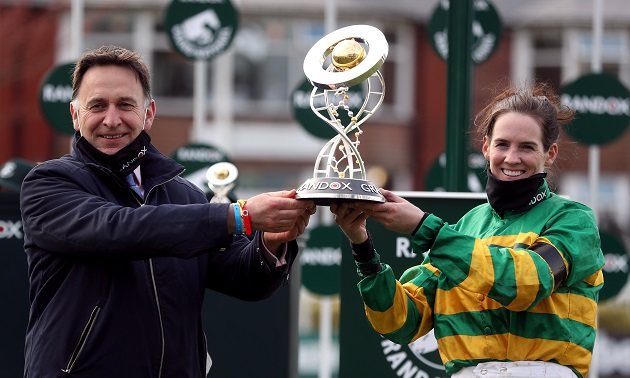 Henry de Bromhead was still on cloud nine on Sunday morning after saddling the one-two in Saturday’s Randox Grand National at Aintree.

Fresh from becoming the first trainer to win the Champion Hurdle, the Champion Chase and the Gold Cup in the same week at the Cheltenham Festival, Minella Times provided the Knockeen handler with National glory, while stablemate Balko Des Flos filled the runner-up spot.

Just as he did after arriving home from Cheltenham, De Bromhead is required to quarantine for five days under Covid-19 protocols – giving him plenty of time to reflect on the enormity of his achievements – and those of Rachael Blackmore.

He said: “We got home safe and sound last night and I’ve got a big smile on my face this morning, that’s for sure.

“It’s incredible – unreal. It’s hard to take it all in, to be honest. Hopefully it will sink in eventually.

“It’s a shame we can’t celebrate it properly, but isn’t it great it was all able to go ahead?”

De Bromhead’s remarkable success has been somewhat overshadowed by Blackmore, who became the first woman in history to ride the winner of the National – just as she was in the Champion Hurdle with the brilliant mare Honeysuckle.

The trainer has nothing but praise for his stable jockey, adding: “I’m absolutely delighted for Rachael. It’s brilliant for her and no one deserves it more.”

Minella Times, Balko Des Flos and Chris’s Dream – who unseated his rider four from home in the Grand National – were all reported to have returned to Ireland in good shape.

Owner JP McManus was winning the Grand National for a second time following the 2010 success of Don’t Push It, who famously provided 20-times champion jockey Sir Anthony McCoy with his first and only victory in the race.

McManus’ racing manager, Frank Berry said: “It was a fantastic day and a great performance by Rachael and Minella Times. All credit to Henry and his team for producing the horse fit and well.

“I’m thrilled for JP and the whole family. It was a special occasion, with Rachael riding the winner – it’s a bit of history.

“Rachael has done it the hard way. She came from the bottom up and has worked really hard. It’s great to see her getting on good horses now and she’s delivering the goods.”

On future plans for Minella Times, Berry added: “You won’t see him again this year. He’ll have a good summer in Martinstown and we’ll plan next year’s campaign for him after that.

“It (next year’s Grand National) is a long time away, but you’d love to think he’ll be back there again.”

The best-fancied of seven McManus-owned runners in the 40-strong field was the Ted Walsh-trained Any Second Now, who ran a fine race to finish third after being badly hampered by the fall of Double Shuffle at the 12th fence.

Berry said: “He ran an absolute blinder. He got caught up with a faller and Mark (Walsh) gave him a wonderful ride to nurse him back into the race.

“That’s the joys of the National. You need a bit of luck on the day.”