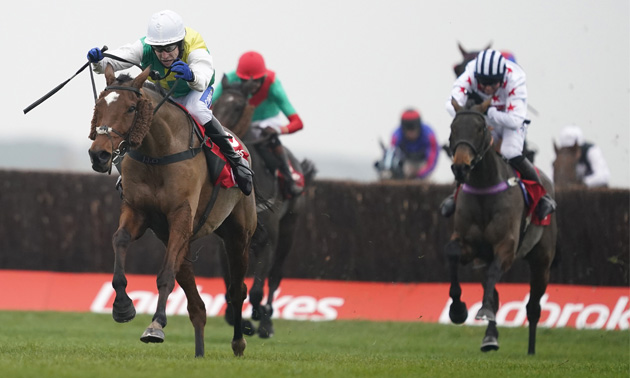 Randox Grand National favourite Cloth Cap warms up for next month’s Aintree spectacular in the bet365 Premier Chase at Kelso on Saturday.

A small but select field of six runners line up for the £45,000 contest, with the Jonjo O’Neill-trained Cloth Cap making his first competitive appearance since landing the Ladbrokes Trophy at Newbury in November.

The nine-year-old is the 14-1 market leader to provide owner Trevor Hemmings with a fourth Grand National success on April 10, following the previous triumphs of Hedgehunter (2005), Ballabriggs (2011) and Many Clouds (2015).

O’Neill said: “He’s in grand form and it looks like the ground is drying out for him.

“He’s not chucked in the race – he’s not well-in [at the weights]. We’re going there for the ground more than anything else. He has his little issues, but he’s fine at the minute and everything is going according to plan.”

Tom Scudamore, who steered Cloth Cap to big-race success at Newbury, is once again on board with a view to keeping the ride at Aintree.

“I hope that’s what will happen, as long as everything goes according to plan,” O’Neill added.

“I don’t want to ride him, anyway. I don’t think I’d do the weight, so he [Scudamore] won’t have a lot of competition! We’ve only got one plan in mind, which we’ve had for the last two years.”

The Hemmings colours are also set to be carried this weekend and at Aintree by Nick Alexander’s stable star Lake View Lad.

The grey beat Cheltenham Gold Cup contenders Santini and Native River when landing the Many Clouds Chase at Aintree in December, but finished a long way behind that pair in the rescheduled Cotswold Chase at Sandown on his latest outing.

“It’s a proper race and I’m pleased it’s a really good race. Kelso have put on some great prize-money and it looks like the number one meeting on the day,” said Alexander.

“It’s a slight step down in grade for Lake View Lad – this is more his grade than the Cotswolds Chase was, so hopefully he can run well. This has always been the plan. It’s a nice prize and a nice race.

“He’s not particularly well in at the weights – if everyone performs to their mark he’s going to be third or fourth, but hopefully he’ll run very well before heading back to Aintree.”

Last year’s winner Definitly Red is back to defend his crown for Brian Ellison, but does have something to prove, after finishing well-beaten in the Charlie Hall Chase at Wetherby before falling in the Rehearsal at Newcastle.

Ellison said: “This his prep run for the National, hopefully. Everything has been fine since the Rehearsal. He went to Wetherby last week for a hack round and we’ve just been waiting for this race. He’s in good fettle.”