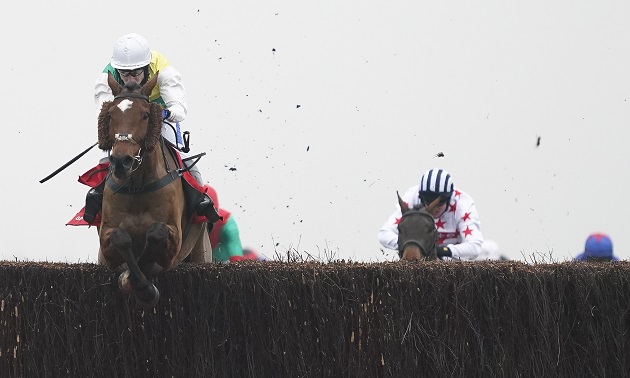 Cloth Cap cemented his place as ante-post favourite for the Randox Grand National with a dominant front-running display in the bet365 Premier Chase at Kelso.

Making his first appearance since landing the Ladbrokes Trophy at Newbury in November, Jonjo O’Neill’s charge was sent off at 100-30 in the hands of Tom Scudamore – and could hardly have been more impressive.

Sent straight to the lead, Cloth Cap jumped accurately throughout and had his four rivals on the stretch before turning for home.

A bold leap at the final obstacle sealed his seven-and-a-half-length success over Aso, prompting his odds to tumble for next month’s Aintree spectacular.

“I was very pleased with him. He travelled away nicely and jumped well,” O’Neill told Racing TV. “He always jumps a little bit left, that’s his make-up. So long as he comes home safe and sound now, we’ll be happy.

“He’s just in great old form at home – he’s a happy horse. He’s a bit of an old character, but he’s a year older and a bit stronger and things are going right for him at the moment. Fingers crossed it will stay that way for a bit longer.

“He jumps well and he stays well, which are two good things to have when you’re going for a National. The plan was to go and win the National last year. We don’t mind if it’s a year late!”

O’Neill, who famously provided Sir Anthony McCoy with an elusive Grand National success through Don’t Push It in 2010, is hoping Cloth Cap can secure owner Trevor Hemmings a fourth, following the previous triumphs of Hedgehunter (2005), Ballabriggs (2011) and Many Clouds (2015).

He added: “It would be special to win the National for him [Hemmings]. He’s just told me off, because the horse will be too short a price now and he won’t be able to back him!”

Cloth Cap breezes to the win in the bet365 Premier Chase

An appearance at Aintree is also on the agenda for My Drogo after extending his unbeaten record over obstacles to three with a facile success in the bet365 Premier Novices’ Hurdle.

Trained by Dan Skelton and ridden by his brother Harry, the six-year-old was the 2-1 favourite to complete his hat-trick following previous wins in a maiden hurdle at Newbury and a Grade 2 Ascot.

Carrying a penalty for that latest win, My Drogo was forced to concede weight all round in his bid to double his Grade 2 tally. However, he proved more than up to the task, pulling clear in the straight for a nine-and-a-half-length victory over Do Your Job.

Dan Skelton, making his first visit to Kelso, said of My Drogo: “He’s very good and every question you ask of him he answers. He’s got all the ingredients. He’s tough and jumps nicely and has that pace I think all good horses need.

“I’m really impressed with how his season has progressed. He’s a very genuine horse and always a willing partner. We’ll step up in grade now and go to Aintree, hopefully. Next year he’s going chasing, so he’s got it all mapped out ahead of him.”

That's 3 out of 3 over hurdles

Irish raider The Shunter won the most valuable race of the afternoon, the bet365 Morebattle Hurdle.

The Emmet Mullins-trained gelding won the Greatwood Hurdle at Cheltenham in November, before reverting to fences to finish third in a handicap chase at Leopardstown’s Dublin Racing Festival.

Switching back to the the smaller obstacles for this £75,000 contest, The Shunter dug deep in the hands of Alain Cawley to see off Night Edition and Faivoir in a driving finish.

Mullins was at Navan, where he completed an across-the-card double with Noble Yeats in a maiden hurdle.

He said of The Shunter’s victory: “That was marvellous. It’s brilliant for Paul [Byrne, owner] as he’s put plenty of money into it and he has two nice horses there to look forward to.

“They went a ferocious gallop at Kelso and the pace collapsed halfway through. It turned into a war of attrition and ‘Squeaky’ [Cawley] was good and was strong on him.

“Anything we’ve asked the horse to do, he keeps coming up trumps for us. He’s a real star. Fingers crossed he’ll go to Cheltenham now. There is a huge bonus and it’s great to have a chance at it.

“I’d say we’ll have to take our chance once the horse is OK. He had a tough race there today, we’ll give him every chance to get over it and try to find one of the races in Cheltenham for him. He’s in plenty of them and we’ll keep all options open.”

The Shunter picks up the bet365 Morebattle Hurdle

Could a 100k bonus await at Cheltenham?