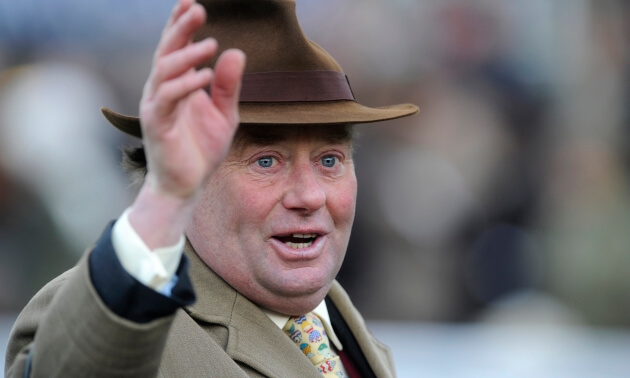 Expensive point-to-point purchase Gallyhill was made to work extremely hard for a winning debut under rules at Newbury.

Bought for £450,000 by Henrietta Knight for owner Mike Grech and sent to Nicky Henderson, the six-year-old won his point at Kirkistown by two and a half lengths.

Sent off the 30-100 favourite in a field of 15 for the MansionBet Is Proud To Sponsor British Racing Novices’ Hurdle, his task was made easier by the withdrawal of what looked to be chief market rival Hoi Polloi on account of the worsening ground conditions.

The extended two-mile affair was run in heavy rain with visibility poor as big outsider Calgary Tiger opened up a sizeable advantage.

By the third-last Gallyhill had cruised up into the lead, but Robin’s Dream headed him after the last.

Nico de Boinville will have been glad a gap was left on the rail, as Gallyhill rallied to the cause and won going away by a length and a quarter.

Henderson said: “It was quite nasty out there and I couldn’t see very much, but Nico said he took a big blow and did well to get back in front.

“He’s a staying chaser and his next run will be over two and a half miles.”

Henderson appeared to have strong claims of an early double on the card with Birchdale in the following MansionBet-sponsored limited handicap chase.

However, JP McManus’ runner found disappointingly little in the straight and it was the owner’s apparent second-string, the Phillip Hobbs-trained Dostal Phil, who claimed the spoils.

The 7-1 chance moved ominously into contention under Richard Johnson and fairly sprinted away – as much as the testing conditions would allow – to win by five and a half lengths from Funambule Sivola.

Johnson said: “He travelled well throughout and in the main I was pleased with his jumping.

“He was a little bit big at a couple early on, but he got better as the race progressed.”

Conceding 12lb to all of her rivals courtesy of wins at Wincanton and Fontwell, she looked booked for second for much of the straight as Tequila Blaze made a bold bid.

Johnson kept his mount on the far side of the track and the 5-2 favourite stuck on gamely to win by two and a half lengths.

“I thought the ground might be a bit fresher on the far side, which is why I went in that direction, and I thought it was a very pleasing effort under a double penalty as there looked to be some decent types,” said Johnson.

“Hopefully she can go on to better things.”