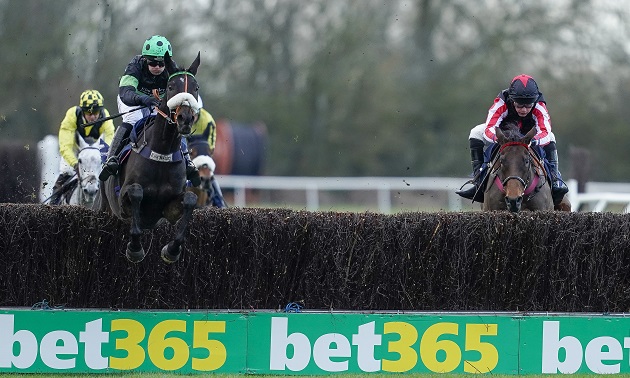 Kim Bailey was left overcome by emotion as stable stalwart First Flow bounced back to his brilliant best with victory in the Fitzdares Peterborough Chase at Huntingdon.

After ending Bailey’s near 26-year wait for a first Grade One since Master Oats 1995 Cheltenham Gold Cup triumph when winning the Clarence House Chase at Ascot in January, First Flow gave him another day to savour in the Grade Two feature at the Cambridgeshire track.

Victory for First Flow looked to be unlikely as the fielded headed out on the final circuit after he firstly made a mistake the open ditch in front of the stands before making another error mid-way down the back straight.

Despite a number of mistakes the 12-1 chance somehow maintained his momentum before moving up behind the early pace setting duo of favourite Allmankind and eventual runner-up Funambule Sivola up the home straight.

As Funambule Sivola pressed on over the penultimate fence First Flow quickly covered the move to join the Venetia Williams trained runner with the pair jumping the last almost as one.

Although having stamina to prove over the two and a half mile trip First Flow continued to find more up the run before passing the post with four and a half lengths in hand.

Bailey, who saddled to Charbel to glory in the 2018 renewal, said: “That was great. I’m pleased for Tony Solomons as he is my longest-serving owner and health has taken over and that is why he is not here today.

“It is extraordinary. He is a freak of nature. After he gave me that first Grade One winner since Master Oats that does make him that bit more special.

“I got him as a four year old and he has got no pedigree to be as good as he is but he has been a freak from day one, but that is what makes good horses.

“This was never on the horizon as he was going to go to Sandown but when they started watering there I thought it would be crazy for him as he is a horse that wants soft ground.

“Watching First Flow has never been a spectacle and I hate every moment as he crashes through every fence. He has got no respect for anything. He is a complete freak of nature and is an oddball in every sense of the rogue.”

Although First Flow was introduced at 20-1 for the Ryanair Chase at next year’s Cheltenham Festival by Paddy Power, a trip to Ascot and the defence of his Clarence House Chase crown appears next on his agenda.

Bailey said: “I jokingly said this will open up options but there aren’t many to go to but it does help a little bit.

“I would definitely think he would go back for the Clarence House Chase now and he might get his ground there.”

Victory for First Flow was special in its own right but it was a success that ended what had been up until this point a tricky weekend for Bailey who 24 hours earlier had seen Imperial Aura pull-up in the Unibet Many Clouds Chase at Aintree.

He added: “Imperial Aura is okay that is the main thing. I’ve never seen conditions like that up at Aintree before. The weather was awful.

“To have a day like yesterday with him and a day like today with First Flow is the complete cross section of racing.”

Winning rider David Bass may have been proved wrong over First Flow’s ability to see out the trip however he described his old ally as a “wonderful horse.”

Bass said: “I hate when the trainer is right. I rode him over two miles three twice a couple of years ago and I was convinced he wouldn’t get the trip and when I pulled up on those occasions I said he is a two-miler.

“He is a far better horse now and he is stronger, bigger and better. He is a wonderful horse. He is such a character.

“It doesn’t bother him going through those fences. He is just a very good horse.”