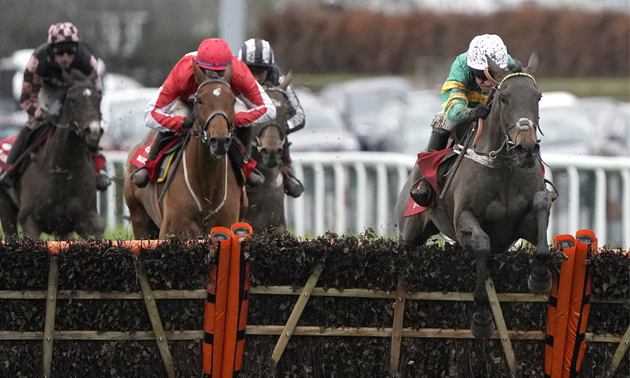 Nicky Henderson reports Epatante ready to start her road back to Cheltenham when she makes her seasonal debut in the Betfair Fighting Fifth Hurdle at Newcastle.

The six-year-old mare enjoyed a stellar last campaign which ended with her winning the Champion Hurdle.

Expectations are high, and the Fighting Fifth has been a successful race for Henderson – with a record five victories already in the bag.

“She’s got a lot of pace, and I think she’ll need it,” said Henderson.

“Hughie Morrison’s horse (Not So Sleepy) goes a right good gallop, so we know there’ll be no hanging around.

“There’ll be no hiding, but luckily she’s done plenty of work – they’ll go a really good pace, and I think we’re up and ready for it.

“It’s been a good race to us, with the exception of last year, that was not a good expedition when Buveur D’Air got an amazing piece of hurdle wedged under his foot, right under the hoof.”

Reflecting on Epatante’s meteoric rise last season, the Seven Barrows trainer said: “She was very, very impressive in the Gerry Feilden, but that was a handicap off 137. It was JP’s (McManus, owner) idea, he said ‘let’s go to the Christmas Hurdle’ – which was a huge jump up from an intermediate hurdle straight into a Grade One, but again that was a very good call.

“She’d done nothing wrong at all, she was very impressive both times.”

Asked about prospects for the defence of her Cheltenham crown, Henderson said: “I think there are plenty of pretenders, there always are. I suspect our route will be the same – I like the Fighting Fifth in that it brings you nicely into the Christmas Hurdle.

“It would be the same timetable as last year, in that she started at this time of year and then you come into Christmas. If all went well we wouldn’t run her again before the Champion Hurdle.

“Hopefully some time after Christmas, Buveur D’Air slots into the equation.”

Sceau Royal was fourth on his only other previous run in this race four years but has a belated second attempt on the back of two convincing wins on his switch back to hurdling.

His performances in the Welsh Champion Hurdle and the Elite Hurdle have shown Alan King’s eight-year-old to still be a very smart performer over the smaller obstacles, after a long spell chasing.

”Sceau Royal has thrived since his wind operation, winning the Welsh Champion and the Elite Hurdle,” the Barbury Castle handler told www.alankingracing.co.uk.

“He’s staying over hurdles for the time being and has earned the right to have another crack at a race in which he finished fourth back in 2016.

“Sceau Royal is in good order and worked very pleasingly on Saturday – and as it looks as though he should get the decent ground that suits him, we are all looking forward to the clash with Epatante.

“He could still possibly switch back to chasing in the spring. But he’s doing all right over hurdles at the moment, and the two-mile chase division looks pretty strong at present.”

Evan Williams is happy to let Silver Streak have a second crack at this prize after he took third place behind Cornerstone Lad and Buveur D’Air 12 months ago.

Like last year, Silver Streak heads to the north-east after winning a Listed hurdle at Kempton.

“It’s just a joy to go up there with him. He’s a smashing horse and has been very good to us,” said the Llancarfan trainer.

“We’ll go there and give it our best shot, but the mare (Epatante) does looks exceptional.

“He deserves to go there, but to win those races is very tough indeed.”

It is 17 years since The French Furze took the Grade One honours for Nicky Richards, and the Greystoke handler is looking forward to giving Ribble Valley this big test after his pleasing success at Carlisle five weeks ago on his first start since disappointing at Ascot last December.

A lovely comeback for RIBBLE VALLEY!

He gives weight and a sound beating to his rivals at @CarlisleRaces for @NGRichardsRace pic.twitter.com/NBoZY8etge

“He’s fine. Everything has gone well since Carlisle, and we’re very happy with him,” he told Sky Sports Racing.

“He seems to have a great cruising speed and finished off with a little kick at the end. He did it very well.

“At Ascot he did not settle at all in the first part of the race – I think that was more his undoing than anything. Anyway, that’s behind us and hopefully it’s onwards and upwards now.

“Tomorrow we’ll find out a bit more. I’ll be disappointed if it isn’t a good end-to-end gallop. We’ve always thought that would suit him ideally, and the track should suit him lovely.

“It’s going to be very interesting.”

An intriguing line-up is completed by last year’s surprise winner Cornerstone Lad, Not So Sleepy and Voix Du Reve.