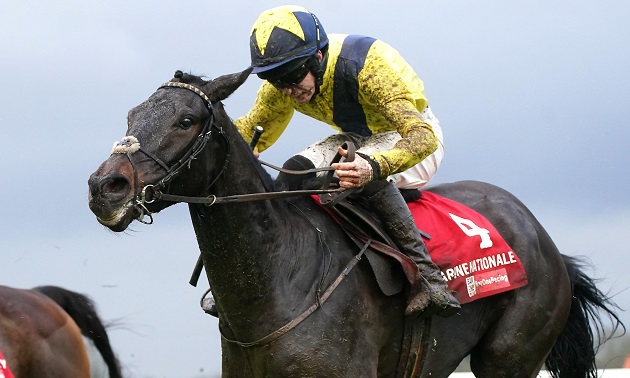 Marine Nationale came with a late rattle to land the Bar One Racing Royal Bond Novice Hurdle at Fairyhouse.

The Barry Connell-trained five-year-old headed into the Grade One contest unbeaten and took the step up to Grade One-level with aplomb under a cool ride from Michael O’Sullivan.

Content to stalk the pace in the early stages, O’Sullivan appeared to have plenty of horse underneath him as the protagonists approached two out. Although temporarily put on the back foot following a mistake at the last, the 11-2 winner responded gamely up the run-in to deny Gordon Elliott’s Irish Point on the line.

Marine National prevailed by a head, with four lengths back to third-placed Ashroe Diamond.

Paddy Power and Betfair make Marine Nationale 7-1 from 16s for the Supreme Novices’ Hurdle at the Cheltenham Festival.

Connell said: “He travelled away, jumped and settled. He nearly threw it away at the last with a bunny hop, but he dug in. It was the first time he’s ever been off the bridle in his life, and he had to be tough.

“I didn’t know what he’d do off the bridle. Sometimes these bridle horses, they don’t find a whole lot, but you’d love the way he battled and toughed it out. I’m thrilled to have him.

“I thought the ground was gone for him today, to be honest. He had been running away on good ground, and this was the softest ground he had.

“We ride him for speed. He’s actually a flat-bred horse, so we were always going to sit in behind the fancied ones and have a go. There’s no point in setting up a target. He’ll improve again from that, and is a genuine Grade One horse now, so happy days.”

Connell has enjoyed plenty of big-race success as an owner over the years with the likes of The Tullow Tank, Foxrock and Our Conor, but he was thrilled to have trained a Grade One scorer.

“I would imagine we will skip Leopardstown at Christmas as he’s had a hard race there, and we’ll probably go Dublin Racing Festival and the Supreme.”

O’Sullivan was notching his first Grade One win and told RTE: “I can’t believe it really. He is just a savage horse. Thanks very much to Barry and all the team at home for putting their faith in me. It went fairly smoothly and I just said I’d ride him for luck down the inside.

“I was crying all morning when the rain was falling as he is a French Navy horse. We thought we might get good ground or even yielding, but we didn’t get either. It was only his second run over hurdles and he was a bit novicey over one or two but just travelled everywhere and I just kept riding him and saving him for as long as I could.

“In fairness to the horse, he missed the last and still picked up at the back of it and went all the way to the line. He probably won with a small bit in hand. I didn’t wing either of the last two and if he did, he would have won even better.”

Mighty Potter made a statement in the Bar One Racing Drinmore Novice Chase at Fairyhouse to give Gordon Elliott his seventh win in the race.

A dual Grade One winner over hurdles last season, he added his third top-table prize and first over fences when landing the two-and-a-half-mile Grade One by a cosy four and a half lengths.

One of two in the race for the contest’s most successful handler, Mighty Potter was always up with the pace in the hands of Jack Kennedy and produced an exhibition round of galloping and jumping.

Kennedy looked to have plenty of horse still underneath him when briefly pressed by Gaillard Du Mesnil in the home straight but ultimately had too many gears for his more experienced rival after the last, storming clear for an impressive victory.

Elliott, who has won this with the likes of Envoi Allen (2020), Delta Work (2018) and his Gold Cup hero Don Cossack (2013) in the past, saw Three Stripe Life pulled up following a mistake by Davy Russell.

But all the focus at Cullentra House will be on the winner, who was cut to 5-1 from 10s with Coral for the Turners Novices’ Chase at the Cheltenham Festival.

Elliott said: “Mighty Potter was brilliant and Jack gave him a wonderful ride. I’m delighted for Andrew and Gemma Brown, Caldwell Construction and Joey (Logan) who buys the horses for them – it’s a big team effort.

“The staff at home are working so hard and to come here today with two winners (after Punitive was successful earlier on the card) and a Grade One is brilliant.

“Jack schooled him last Monday and I was happy when I saw the smile on him after he came back in.

“He’s still very immature but he’s a good horse. He won two Grade Ones last year and we’re lucky to have him.

“I would imagine he’ll stay at this distance. We don’t need to rush him. We’ll enjoy today and see what happens.

“The second horse is a second-season novice and was placed in the Irish National and they are clear of the rest.”

Lossiemouth staked her Triumph Hurdle claims in style as she led home a Willie Mullins one-two in the Bar One Racing Price Boost Juvenile Hurdle at Fairyhouse.

The Closutton handler was responsible for four of the 10 runners in the Grade Three contest, but it became obvious this would be fought out between Lossiemouth and the 5-4 market leader Zarak The Brave as the race entered the business end. And it was the clinical jumping at the last two flights which sealed victory for the Danny Mullins-ridden winner, who was sent off the 3-1 second favourite.

Owner Rich Ricci has not been shy in mentioning Lossiemouth in dispatches since acquiring the daughter of Great Pretender following a 10-length win at Auteuil in April and this taking stable debut will have connections dreaming she could follow in the footsteps of Vauban, who scooped top juvenile honours at the Cheltenham Festival earlier this year.

“That looked very good,” said Mullins. “She came with a nice reputation from France and has been working nicely at home but that’s certainly way better than anything she has shown us before.

“Today was just a finding-out mission to see what we had and it looks like we have found a good one.

“Danny said he could have gone at any stage. He said her jumping was very good and she has so much scope. She was very good.

“We’ve found out a lot today and look forward to the future with her. We’ll have a look at Leopardstown at Christmas and see what the penalty structure is and there is also the Grade One at the Dublin Racing Festival.”

Betfair responded by making Lossiemouth 5-1 from 12-1 for the Triumph Hurdle.