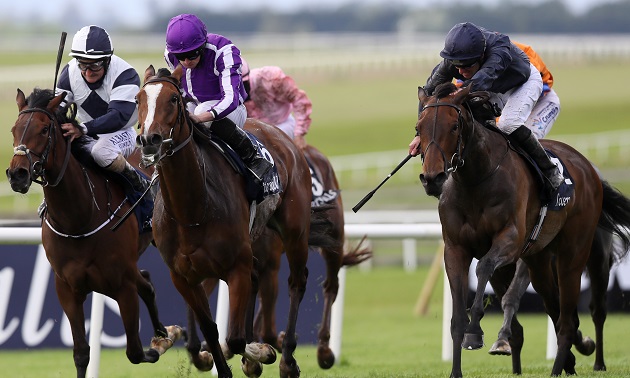 Mother Earth beat Saffron Beach at Newmarket, and then put up a bold display in the French equivalent when beaten just over a length by surprise winner Coeursamba.

Empress Josephine was supplemented for Friday’s Group 1 following her last-gasp win at the Curragh over stablemate Joan Of Arc – who has been taken out at the six-day stage. O’Brien has also left in Friendly.

His two sons Joseph and Donnacha both have live chances too. Joseph’s Pretty Gorgeous and Donnacha’s Shale met several times last season with both enjoying a degree of success – but they also need to put disappointing runs on their reappearances behind them.

Henry de Bromhead has supplemented Flirting Bridge, second to Joan Of Arc in a 1,000 Guineas Trial, while Peter Schiergen has also added Novemba to the possible field.

Sir Michael Stoute has left in the unbeaten Potapova, impressive in her two starts to date but set for a massive leap in class.

Alcohol Free could represent Andrew Balding – having won the Fred Darling and finished fifth in the Guineas – while Ed Walker’s Primo Bacio, so impressive at York last time out, is another lively contender.

Wesley Ward’s Campanelle is among 24 left in the Commonwealth Cup at Royal Ascot.

Winner of the Queen Mary last year, Campanelle went on to take the Prix Morny in France too and then finish fourth at the Breeders’ Cup over a mile.

Clive Cox has a strong hand on Friday – with the improving Diligent Harry and Middle Park winner Supremacy, although the latter needs to put a dismal first run of the season behind him.

There is a strong challenger from France in the shape of Suesa, who has been impressive in remaining unbeaten for Francois Rohaut in four outings to date.

Archie Watson’s Dragon Symbol, narrowly beaten at Haydock last time out, is another well fancied – while Aidan O’Brien could drop Battleground in trip after he disappointed in the 2000 Guineas behind Poetic Flare.

Method, The Lir Jet, Dandalla, Happy Romance, Miss Amulet and Sacred are others who are likely to have plenty of supporters in the six-furlong Group 1 for three-year-olds.

O’Brien has supplemented The Mediterranean among 15 for the King Edward VII Stakes – from which, as expected, Sir Michael Stoute’s Bay Bridge is an absentee.

William Haggas’ Alenquer will no doubt attract many backers, given he was last seen beating Derby winner Adayar at Sandown.

Sir Mark Todd will be saddling his first Royal Ascot runner in the shape of Tasman Bay, while Mark Johnston’s Gear Up could make a quick reappearance after the Derby.

There are 24 fillies in the Albany Stakes – with a pair from George Boughey’s stable to the fore, in Beautiful Sunshine and Cachet.

Simon and Ed Crisford’s Flotus, Ralph Becket’s Hello You and Ward’s Kaufymaker – who is thought more likely to run in the Coventry Stakes – and O’Brien’s Prettiest all made a big impression when winning on their debuts.

A total of 39 have been entered for the Sandringham Stakes, in which Roger Charlton’s Lucid Dreamer could look to bounce back from a below-par run in the Fred Darling.

The Duke of Edinburgh Stakes has attracted 43 entries – including Favorite Moon, who last ran in Australia for Haggas. Last year’s winner Scarlet Dragon could be back again.