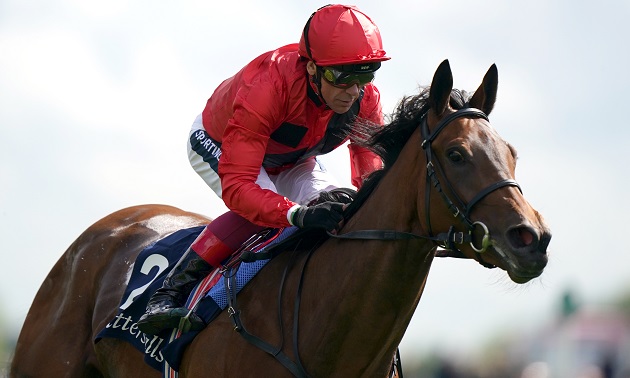 Emily Upjohn was a runaway winner of the Group Three Tattersalls Musidora Stakes for Frankie Dettori and John and Thady Gosden.

Emily Upjohn pulled hard in the first half of the race and was heavily restrained by Dettori until two furlongs from home, when she was allowed to go forward and pass the race leader.

The daughter of Sea The Stars then accelerated away from her four rivals, crossing the line five and a half lengths ahead of Life Of Dreams as the 4-7 favourite.

Prior to the race Emily Upjohn was a 7-2 chance for the Cazoo Oaks and was cut to 6-4 favourite following the success by Betfair.

Gosden said: “It’s interesting that Frankie said the ground was quite tiring after the little bit of rain they’ve had on it. A few of them were struggling four or five out.

“Frankie waited to go and she’s picked up well and looked like a mile and a half would be right up her alley. She couldn’t have done it any better really.

While the Clarehaven handler is confident in Emily Upjohn’s ability to handle the undulations of Epsom, he plans to give her a pre-race visit to the track for the Cazoo Derby Gallops Morning on May 23.

He added: “She’s very well balanced, but there’s no reason we won’t get some sausage and bacon on the breakfast morning at Epsom. We can have a canter round the track there to see how she handles it.

“She’s a lovely filly and well balanced with a good stride and she’s learnt a lot today.”

Comparing Emily Upjohn to his 2012 Musidora winner The Fugue, Gosden added: “She’s in that class. The Fugue was extremely unlucky in the Oaks (finished third) as she got knocked over – the less said about that the better.

“I would say this filly is in that class. The Fugue was a mile-and-a-quarter filly, but this filly wants a mile and a half.

“We’ve been lucky to win the Oaks three times and she very much deserves to be in that league.”

Dettori said: “She was keen early on, but she’s in control and you want her like that.

“The ground is a lot deeper than you guys think. Everybody was struggling from four furlongs out and I kept her together and from two-and-a-half to the winning post, I didn’t see another horse.

“She won in good style by five and a half lengths – what more do you want?

“We never had any worries about staying a mile and a half.”

Dettori ranks Emily Upjohn favourably among his previous Oaks winners, adding: “She’s getting there. Enable won at Chester and at this stage she was probably on the same par.

“With every race this filly is improving, we’ve liked her since day one and I’m delighted – we can sleep nicely tonight!”

Alex Merriam, Charlie Appleby’s assistant, trainer of the runner-up, said: “We were pleased, that was only her second run and I think she’s run into a very nice horse.

“We’ll see how she is and hope things go to plan. The Oaks might still be a possibility but I haven’t spoken to Charlie yet.

“She’d either run there or the Ribblesdale, I’d let Charlie speak to His Highness (Sheikh Mohammed) and we’ll see how we go.”

David Simcock, trainer of the third, Ching Shih, said: “Obviously the winner is pretty smart, it doesn’t take a genius to work that out.

“I said before the race they were just five novice winners and they were all in the same boat.

“The winner looks exceptional but our filly has acquitted herself well. She was the only one out of the first four not to have had a run and she’ll come forward for it.

“I think when she gets her mother’s (Madame Chiang) ground (soft) she’ll improve for it as it will actually make her quicker, if that doesn’t sound stupid.

“I don’t know where she will go but it won’t be Epsom – unless the winner scares everything off.”

Highfield Princess was a taking winner of the 1895 Duke Of York Clipper Logistics Stakes for jockey Jason Hart and trainer John Quinn.

The mare travelled prominently despite being restrained by Hart in the early stages of the Group Two contest and then eased clear when asked to quicken.

Left alone in the lead in the final furlong, the five-year-old began to drift towards the outer rail but was still a comfortable two-and-three-quarter-length winner from Karl Burke’s 9-1 chance Spycatcher.

Owen Burrows’ Minzaal was the third-placed horse as the 11-4 joint favourite, with Dragon Symbol disappointing at the same price on his first run for Roger Varian.

Quinn, who was on his way to the Arqana sales in France, said of the 11-2 victor: “I got to see it just before I was about to get on the train.

“I’m obviously delighted, she was very impressive, just what I wanted to see.

“I think we’ll probably wait now until the six-furlong race at Ascot (Platinum Jubilee), that’s the obvious next race for her.

“What has been really pleasing to see of late is that if anything she’s getting quicker, they were never going too quick for her there.

“Now I just hope I can find the next one.”

Hart said: “I didn’t think she’d travel that well to be honest. I don’t know what the boss does but he’s made her quicker.

“I got her in a lovely rhythm and at halfway she lit up underneath me. When I pressed the button, I couldn’t believe how she picked up and put the race to bed.

“She was my first Royal Ascot winner and going back there looks the obvious place to go.”

Burke was more than satisfied with the runner-up’s effort, but felt he may have been a little unlucky.

“It’s a shame we got a little bit hampered because he is quite a competitive horse when he gets upsides. The winner was the best horse on the day, but we’d have been a couple of lengths closer I think if we’d had a clear run.

“He’s suffered with his feet a little bit and should have won on Good Friday really, but to come and do it in that grade is brilliant and gives us a lot of hope for the future.

“I’m not sure where we’ll go next. He is actually in the Group Two at the Curragh on Sunday week (Greenlands Stakes), but I’d imagine that will come too quick and will be a very hot race.

“We’re not entered at Royal Ascot and I think the ground would be the key to him really with his feet – a bit of juice in the ground is perfect.”

Minzaal was the only one of the first three to be making his seasonal reappearance and Burrows said: “I’m happy enough with that as I felt this might just knock the cobwebs away.

“It was a funny old race. He jumped well, which I was pleased about as he’s been a little bit slow at times and he travelled well, but the winner didn’t stop did she?

“She drifted away from him, so he didn’t have anything then to take him into the race.

“He’s having a nice blow and I’m sure he’ll come forward plenty from that. Like everybody we’ve been waiting to get some serious work in on the grass, so hopefully the rain will allow for that and we can move forwards to Ascot.”