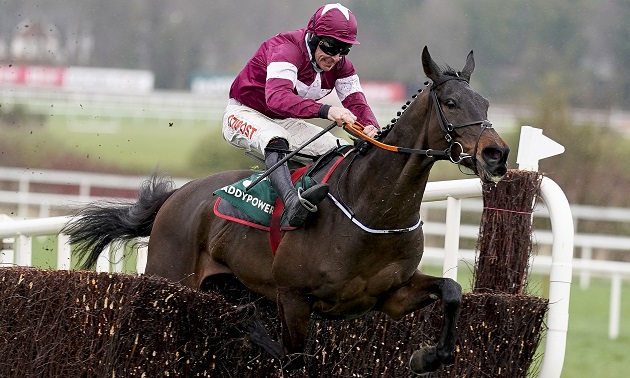 Galvin, Conflated and Fil Dor are among the big names set to be in action for Gordon Elliott over the festive period as the Cullentra handler shuffles his pack for Leopardstown’s Christmas Festival.

Elliott has enjoyed huge success at the four-day meeting in recent years, with Galvin’s thrilling Savills Chase victory over A Plus Tard a clear highlight in 2021.

The eight-year-old will return to Foxrock with a point to prove after disappointing on his seasonal reappearance in the Ladbrokes Champion Chase at Down Royal last month and is set to be joined by two stablemates in Conflated and Fury Road.

Conflated won the Irish Gold Cup at Leopardstown last season and is expected to improve for his run when third in the same Down Royal race, while Fury Road won a Grade Two on the same card.

“I was very happy with Conflated in Down Royal. He had a good blow and came on an awful lot for the run,” Elliott said during a press morning at his yard on Monday.

“This will be his next target and he’s a good horse. He probably surprised me a little bit in the Irish Gold Cup, but he’s a fair horse on his day.”

Of Galvin, he added: “He scoped dirty after Down Royal but is back in good nick now and I’d imagine he’ll go to Leopardstown again.

“He’s got a big heart and finished fourth in the (Cheltenham) Gold Cup. He probably doesn’t get the credit he deserves.

“We’ll probably run Fury Road as well. He always seemed to be a little bit of a bridle horse, but I liked the way he put his head down in Down Royal and he’ll love the ground in Leopardstown too.”

As usual Elliott is well stocked in all areas, but his novice chasing team appears particularly strong.

Fil Dor, a top-class juvenile hurdler last season, made a smart start to his career over fences at Navan on Sunday and is set for an immediate step up to Grade One level in the Racing Post Novice Chase on December 26.

Elliott said: “It probably looks like we’ve got a good bunch of novice chasers. We’ve a few nice novice hurdlers coming along as well, but I’d say we might be a little bit strong with the novice chasers at the moment.

“I thought Fil Dor jumped very well in Navan – he was foot perfect and attacked his fences. He always looked like he was going to be a chaser and I thought he was good.

“I’d imagine Leopardstown is where he’ll go. It would look perfect timing and he’s got strong with a summer’s grass, so he’ll head there.”

One of Fil Dor’s biggest rivals could prove to be fellow Elliott inmate Hollow Games, who also made a successful chasing debut at Navan earlier in the month.

The trainer added: “Hollow Games was in Navan this morning and jumped very well. I might have been running him over the wrong distance last year – I was trying to make him into a stayer, but the way he won over two miles and one (furlong) in Navan the last day, it might just be his trip.

“He’ll probably go to Navan on Sunday week and then go on to Leopardstown as well.”

Mighty Potter’s festive target should become clearer after he contests this weekend’s Drinmore Novice Chase at Fairyhouse, while it is surely only a matter of time before Grade One-winning hurdler Three Stripe Life steps up to the highest level over fences after bolting up on his introduction at Naas.

“He blew very hard after the race. He’s a big, gross horse and I’d say there could be a lot of improvement from that race in Naas,” Elliott added.

Other novice chasers in contention to run over Christmas include Minella Crooner, who is bound for the three-mile Neville Hotels Novice Chase.

Gerri Colombe is also in the mix for that Grade One heat, but only if conditions at Leopardstown are softer than is often the case.

The novice hurdling squad in County Meath is not too shabby either, with Absolute Notions towards the top of that particular pecking order.

The Milan gelding was a 25-1 winner in a Punchestown bumper on his debut, but proved that was no fluke when returning to the same track to make a winning hurdles bow earlier this month.

He is one of several Elliott-trained entries for Leopardstown’s Future Champions Novice Hurdle along with the likes of Listowel winner Amir Kabir, Cork scorer Irish Point and Imagine, who was narrowly denied a second win over obstacles at Gowran Park on Saturday.

Elliott said: “I’d say Absolute Notions is a good horse. I’d imagine he’ll be stepping up up in trip. Whether he goes for the Future Champions I’m not sure.

“Amir Kabir was very good in Listowel and I’d say he’ll probably go here. He gave himself a cut in Listowel and missed a bit of work, which is why he won’t run until Leopardstown.

“He’s a nice horse and I’d say he’ll love the ground in Leopardstown.

“Imagine could go here – he’s a good horse. He might have won in Gowran if he jumped the last, but the winner (Inothewayurthinkin) looked very smart.

“Irish Point looks very nice and we like him. He has a bit of class, a bit of boot and a bit of speed.”

Zanahiyr has undergone wind surgery since disappointing in the Lismullen at Navan and looks set to step up to three miles for the first time in Leopardstown’s Christmas Hurdle on December 28.

Elliott’s chief hope for the following afternoon’s Matheson Hurdle over two miles is Pied Piper, who has already won at Cheltenham and Down Royal this season and will try to make an impact in a Champion Hurdle market that is currently dominated by the brilliant pair of Constitution Hill and Honeysuckle.

Honeysuckle might be unbeaten in 16 runs and already a dual Champion Hurdle winner, but Constitution Hill is odds-on to take her crown after a blistering comeback in the Fighting Fifth at Newcastle.

“I was very impressed with Constitution Hill – it will be great to see him and Honeysuckle going head-to-head in the Champion Hurdle,” said Elliott.

“I’d imagine we’ll probably run Pied Piper over Christmas. He’s two from two this year and he’ll need to improve again to get to Grade One level, but he has got stronger.”