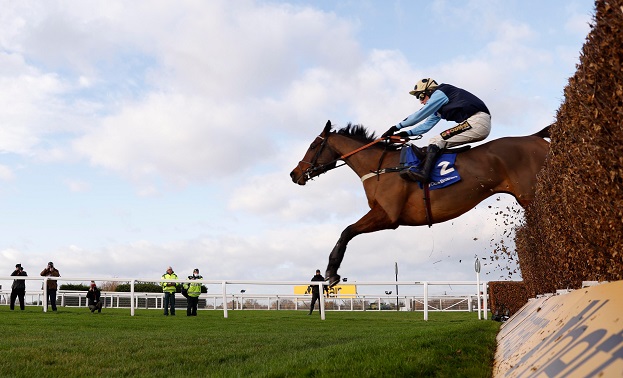 Alan King’s Sporting Life Arkle hero Edwardstone marked himself out as a Champion Chase contender as he lowered the colours of defending champion Greaneteen and Shishkin in the Betfair Tingle Creek Chase at Sandown.

The eight-year-old – who ended the Barbury Castle handler’s seven-year Cheltenham Festival drought in March – had hitherto had a frustrating season, missing intended engagements in both the Shloer Chase at Cheltenham and in handicap company at Ascot the following weekend on account of unsuitably quick ground.

However, he proved well worth the wait and having been smuggled into contention by big-race pilot Tom Cannon, showed a frightening turn of foot once tackling Greaneteen at the second-last and stormed clear up the Sandown hill to record an emphatic nine-length success at 5-1, with Shishkin another six lengths back in third.

It was Edwardstone’s second win on Sandown’s pre-Christmas card, following up last year’s victory in the Henry VIII Novices’ Chase with more Grade One glory, and King finally gets his hands on the trophy having finished second with Voy Por Ustedes in both 2006 and 2007 and then saddling Kumbeshwar to chase home Sprinter Sacre in 2012.

Paddy Power responded by going 11-4 from 8-1 for Edwardstone to record further Cheltenham Festival success in the Queen Mother Champion Chase in March.

King said: “I have to thank Nicky Henderson for letting me work him there (Seven Barrows) last week. But in reality mine usually need a run back, and if he’d finished third or fourth I would have been happy enough. But to win, I’m ecstatic.

“The ground was too firm at Cheltenham and Ascot was too quick. There’s been a lot written about it, but without doubt this is the nicest ground and streets ahead of Ascot and even Newbury.

“He’s blown me away a little bit. I have it in the back of my head to go for the Desert Orchid and I would like to run him in the Game Spirit at Newbury.

““He was a bit fresh and I lost a heartbeat when he pitched at that Railway fence, but he pinged the next two.

“The Tingle Creek has always been on of my favourite races and the horse it is named after helped me get interested in the sport. I’ve finished second in it three times before today, and it’s one of the most emotional wins I’ve had in my career.”