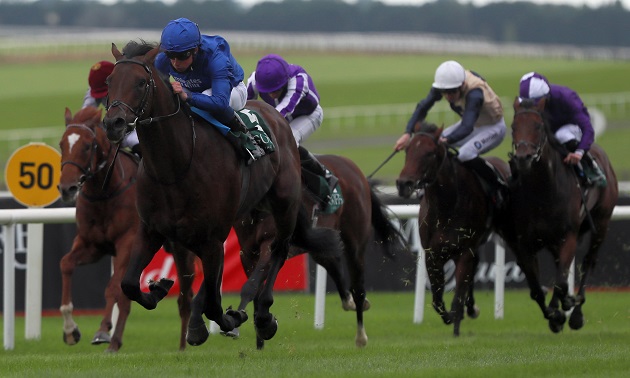 Native Trail rocketed to 2,000 Guineas favouritism as he maintained his unbeaten record with a brilliant victory in the Goffs Vincent O’Brien National Stakes, giving trainer Charlie Appleby a third win in the Curragh showpiece.

Previously successful in the Group 1 contest with Quorto (2019) and the brilliant Pinatubo (2020), the Moulton Paddocks handler – on the mark 24 hours earlier with Hurricane Lane in the St Leger at Doncaster – sent another high-class juvenile across the Irish Sea in search of top-level honours.

A son of Oasis Dream, the Superlative Stakes winner faced a far from straightforward task, with the Aidan O’Brien-trained Point Lonsdale the 8-13 favourite to make it five from five, and Hugo Palmer’s Ebro River bidding to follow up success in last month’s Phoenix Stakes.

William Buick had to nudge Native Trail (7-2) into contention with a couple of furlongs to run – but he really found top gear late on.

Point Lonsdale did his best to make a race of it, but Appleby’s ace was three and a half lengths clear of the odds-on shot at the line, with Ebro River close up in third.

Paddy Power make Native Trail their 5-1 favourite (from 10-1) for next year’s Guineas, with Coral and Ladbrokes both 4-1.

Appleby said: “This is a route we’ve taken with Pinatubo and Quorto before him – and it was always our plan immediately after the Superlative to come here with this horse.

“People ask ‘why don’t you look at the Champagne Stakes’ (at Doncaster), but I didn’t feel carrying a penalty there on softer conditions was potentially going to suit him.

“I think this is a great race and an indicator to the Dewhurst. It’s a Group 1 and a great weekend to be involved in.

“To have another winner of the National Stakes is very satisfying.”

He added: “He’s an interesting horse to be around. I took him to Newmarket a couple of weeks ago and if you’d asked me there if we’d have been winning a National Stakes, I might have been sat on the fence slightly.

“Full credit to the team at home. We definitely felt the horse had come forward for that gallop and we changed a bit of equipment on him today.

“William said he’s still so green and it felt like he was going down to the start on a maiden.

“He gave him a shove early doors to get up the revs, but I knew with two furlongs to go the one thing this horse was going to do was gallop out strong.

“I’d say we’ll go straight to the Dewhurst. I don’t know if he’s quite got the head for a Breeders’ Cup yet.”

Discoveries stays on to win the Moyglare Stud Stakes

Discoveries provided Jessica Harrington and Shane Foley with yet another Irish Champions Weekend success in the Moyglare Stud Stakes.

Harrington and Foley teamed up for a treble at Leopardstown on Saturday, highlighted by the Group 1 victory of No Speak Alexander in the Matron Stakes.

Discoveries was sent off at 17-2 to emulate her, having finished third behind the reopposing Agartha in the Debutante Stakes over the course and distance just three weeks ago.

Agartha looked likely to follow up after seeing off a number of challengers, but she was unable to resist the late surge of Discoveries, with three-quarters of a length separating them at the line.

Harrington said: “To win two Group 1s this weekend is just something else.

“She’s a lovely filly. She’s completely different to her full-sister Alpha Centauri, who was a big grey.

“This filly has done a lot of growing and has a lovely temperament – she’s not as feisty as Alpha.

“Her half-sister Alpine Star was different again. How can I be so lucky to have three fillies out of the same mare that have all won Group 1s?

“This filly was green first time she ran and then she won her maiden. We hoped she’d win the Alpha Centauri Debutante, but the ground came up soft that day and she goes on top of the ground.”

Just over three weeks on from his lucrative handicap success at York, Johnny Murtagh’s charge stepped up to Group 1 level for the first time under Ben Coen.

The leader weakened early in the home straight, which left Melbourne Cup winner Twilight Payment in front before Sonnyboyliston (4-1) arrived on the scene travelling strongly.

Twilight Payment did not give in without a fight, but Coen’s mount kept finding for pressure and was three-quarters of a length to the good passing the post.

Murtagh, who won the Irish St Leger as a jockey when dead-heating aboard Jukebox Jury a decade ago, said: “On Friday I was bullish about the weekend and then after yesterday’s runners, I came here thinking we had a little chance.

“He was one of our best runners of the week, he never disappoints and I thought he did very well to win today – it looked like a proper race.

“I was a nervous wreck beforehand, but he had a good position all the way. He comes off the bridle, but I thought from two furlongs down Ben looked confident on him. He got into a bit of a battle, but he never lacks in a battle and I thought Ben was brilliant.

“I want to have runners on Irish Champions Weekend – it’s great to sit down and make entries in these great races.

“This horse has won an Ebor and has now won an Irish St Leger – I can’t say enough about him.”

Romantic Proposal saw off a strong British challenge to claim top honours in the Derrinstown Stud Flying Five Stakes at the Curragh.

Six years on from saddling star sprinter Sole Power to claim the Group 1 contest, trainer Eddie Lynam was out to double his tally with Romantic Proposal, who was a 16-1 chance in a market dominated by the raiding party.

The Kevin Ryan-trained Glass Slippers also crossed the Irish Sea to defend her Flying Five crown, but in the end none could get into the first two places.

Winter Power set a furious pace for much of the way, but her challenge ultimately ended pretty tamely.

Dragon Symbol and Glass Slippers both looked dangerous racing inside the final furlong, but Romantic Proposal finished best in the hands of Chris Hayes to score by half a length from A Case Of You, with Glass Slippers third and Dragon Symbol fourth.

Lynam said: “She’d been progressing and has just kept on improving.

“Amy, my daughter, bought her as foal. I always believed that the way the filly was improving, she was capable of running a big race.

“I thought it would go to England, to be honest, but she did everything great.

“I think it’s six years since I’ve had a Group 1 winner. It’s nice to have another one.

“I’ve only 30 horses, so we’re smaller now – but the team work very hard, and we’re still passionate about it.