Coroebus in top form ahead of Marois challenge 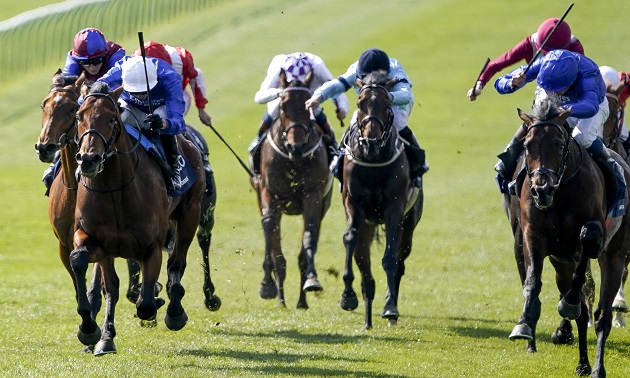 Royal Ascot winners Coroebus, Inspiral and State Of Rest are set to do battle in a mouthwatering renewal of the Prix Jacques le Marois at Deauville on Sunday.

Coroebus has met with defeat just once in five starts for Charlie Appleby and has been faultless so far this season – defeating stablemate Native Trail to provide his trainer with a first 2000 Guineas success before recording a narrow victory in the St James’s Palace Stakes.

The Dubawi colt missed his intended run in the Sussex Stakes at Goodwood last month due to a setback, but jockey William Buick reports him to be back on form and is eager to renew the partnership.

He said: “There isn’t much we can say about him that hasn’t already been said. He had a setback and all is fine. He seems in good form and it is a good race, as you’d expect. We are looking forward to seeing him again.

“I sat on him at home a couple of times and he’s in good order. He is drawn nine and it is a straight mile. It is always normally a fair track, so that is not anything to worry about.

“The ground looks like it is going to be fast, but the last time I was there, there was a nice covering of grass and hopefully it will be the same on Sunday.”

John and Thady Gosden’s Inspiral was in a different league to her contemporaries as a two-year-old and looked better than ever on her belated reappearance in the Coronation Stakes at the Royal meeting.

She suffered a shock defeat in the Falmouth at Newmarket last month when beaten by Ralph Beckett’s Prosperous Voyage, who is once again in opposition, with the dreaded ‘bounce’ factor taking the blame.

But having ridden her in a crucial workout in Newmarket earlier in the week, jockey Frankie Dettori is hopeful Inspiral will show her true colours.

“I know she had little bit of a blip at Newmarket last time, but you have to excuse her after the long lay-off and sometimes horses can throw a bad one in. When I say bad, she was second, but she didn’t run to her full potential,” the Italian told Sky Sports Racing.

“We’ve got to take on the boys and the older horses, so we’re going to go in the deep end – come on the girls!”

State Of Rest has already won four times at the highest level for Joseph O’Brien – twice in Australia, once in France and once in Britain after landing the Prince of Wales’s Stakes in June.

While all of those triumphs have come at around a mile and a quarter, O’Brien is eager to see if he can prove as effective at a mile this weekend.

He said: “We’ve been very happy with him, he’s trained very well. It looks a tough race at the weekend, but we’re looking forward to seeing how he performs at a mile.

“He’s a horse that’s always shown plenty of speed and it will be interesting to see how he can perform at a shorter distance.

“Every day he goes to the track, he turns up and he has no problem leading, like he did last time. I think he can perform very well at a mile, whether he can win a Group One at a mile, we’ll find out at the weekend.

“He’s proved himself a horse of the highest class. I think it’s fairly obvious he’ll be ridden in an uncomplicated way, whether he’s getting a lead or not. It comes either way to him.”

Aidan O’Brien and Ryan Moore team up with Breeders’ Cup Mile winner Order Of Australia, who needs to bounce back from a disappointing run in the Sussex Stakes at Goodwood.

“He clearly didn’t run his race in the Sussex Stakes last time – I don’t think he likes the downhill track there – so I’d be inclined to put a line through the performance and concentrate on his best efforts, which give him definite chances here,” Moore told Betfair.

“He doesn’t need to lead, but he is very good when getting on the front end, and he posted an excellent third in this race last season before going on run Baaeed to a length and a half at Longchamp.

“That’s proper Group One form in anyone’s language, and I often feel he is underestimated in these races.”