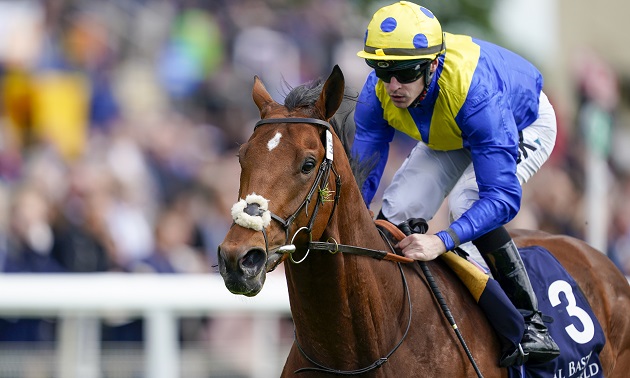 Connections of Desert Crown expressed their satisfaction after the Cazoo Derby favourite enjoyed an early-morning workout on the Watered Gallop in Newmarket on Thursday.

So impressive when winning the Dante at York earlier this month, the Nathaniel colt is a best-priced 9-4 to provide trainer Sir Michael Stoute with a sixth Derby success following the previous triumphs of Shergar (1981), Shahrastani (1986), Kris Kin (2003), North Light (2004) and Workforce (2010).

While the Watered Gallop is usually closed on Thursdays, Desert Crown was given permission to use the strip that sits adjacent to the Rowley Mile alongside fellow Saeed Suhail-owned stablemate Solid Stone.

And with big-race jockey Richard Kingscote in the saddle, the Epsom favourite pulled nicely clear of the 112-rated six-year-old ahead of his bid for Derby glory on Saturday week.

Bruce Raymond, the owner’s racing manager, said: “He went nicely and everyone is happy. He went on the Watered Gallop and we’re very pleased with him.

“He’s not a great worker, but I believe everyone was very happy with him this morning, both the jockey and Sir Michael.”