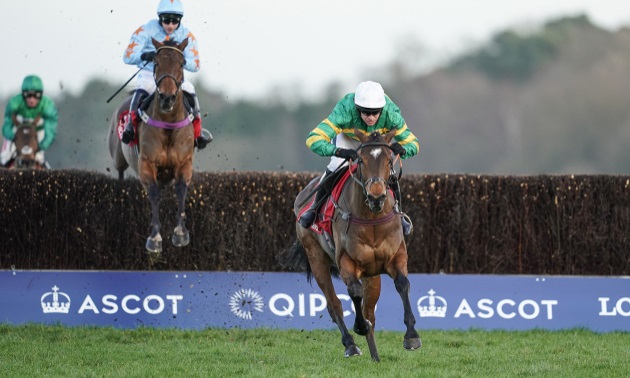 Get the Timeform verdict for each contender for the Clarence House Chase at Ascot in our runner-by-runner guide.

Kempton Grade 2 winner last winter. Also third in the Champion Chase in March but it was a substandard renewal of that race and he's been below par on both runs this term. Others are more appealing.

Landed this last year but he disappointed when odds-on for the Champion Chase in March and posted another lacklustre display on his reappearance. Top-class at best but has something to prove for now.

2019 Arkle winner for Willie Mullins. Just about his best run since when second to Put The Kettle On at Cheltenham on reappearance/yard debut but not in the same form when third at Kempton since.

Impressive on British debut last winter. Disappointed in Kempton Grade 2 next time but back on track when second in a 2m Cheltenham handicap on return. Going well when falling three out in a Grade 2 since.

Useful hurdler who has progressed into a smart chaser, making it six wins in his last eight starts when landing the Castleford at Wetherby over Christmas. This asks a much bigger question of him, though.

Pair of novice chase wins this term but his limitations over fences were seemingly exposed when a well-held third in a Grade 2 in between and surely biting off more than he can chew in this company.

Dominated from the outset when back to his very best to land the Champion Chase at Cheltenham in March and returned to win a second Tingle Creek at Sandown last month. Bold jumper who should again take plenty of beating.

POLITOLOGUE wins a second #BetfairTingleCreek, leading home a 1-2 for @PFNicholls who saddles his 11th winner of the race 👏pic.twitter.com/Q2D5nl8C3o

Impressive winner of 2½m Grade 1 here in 2018. Fine third in the Tingle Creek on his sole run last term and underlined his versatility regards trip when fast-finishing second in tje 3m King George on return.

POLITOLOGUE is minus Harry Skelton, who has struck up such a good relationship with him, but he'll take plenty of stopping if in anything like the same form as when landing a second Tingle Creek last month.

With doubts about the current form of Defi du Seuil the obvious threat is King George runner-up Waiting Patiently, who showed he has the speed for 2m when third in last season's Tingle Creek.